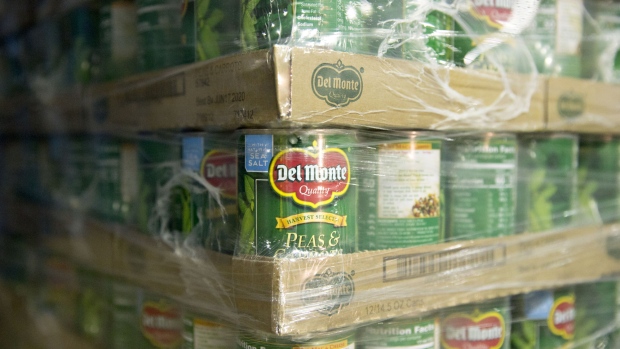 Labeled cans of peas and carrots sit on a pallet for delivery at the Del Monte Foods Inc. facility in Mendota, Illinois, U.S., on Friday, June 23, 2017. The facility processes approximately 25 tons of peas per hour and produces between 1.5-2 million cases of canned peas per year. Peas are canned and cooked within 4 hours of harvest on average. , Bloomberg

(Bloomberg) -- If your supermarket bill seems to be inching higher, it’s not just your imagination.

The U.S. is in an “inflationary environment” right now, according to Greg Longstreet, chief executive officer of Del Monte Foods Inc., with tariffs driving up prices on his company’s canned fruits and vegetables.

“Tariffs impacted us immediately,” he said in an interview in New York. The Trump administration placed a 25% tariff on steel imports and 10% tariff on aluminum imports in March 2018, leading U.S. producers to raise their prices as well. “Canned costs went up 25% overnight,” he said.

Longstreet said transportation costs, which he described as “out of control,” and a tight labor market are also causing prices to rise.

In addition to paying more for metal, mandarin oranges’ cost has also climbed because of the tariffs. He said the company looked for ways to offset the increase, but ultimately had to pass a 10% hike on to customers.

The company is turning to more non-canned products, which Longstreet estimates will eventually produce 40% of the company’s revenue. Del Monte, which has $1.5 billion in sales each year, recently unveiled seven new uncanned product lines, including Fruit Crunch parfaits and frozen Veggieful Bites, as it looks to push beyond the can.

Widespread increases in prices could push up inflation, something that’s consistently been weaker than the Federal Reserve’s 2% target. Economists currently project gains in inflation of between 0.1 to 0.3 percentage point amid the Chinese tariffs and counter-levies by 2020. Prices for food consumed at home have risen since October after several years of relative stability.

At the same time, Fed policymakers have continued highlighting patience when digesting data. But Longstreet suggested shoppers are now starting to feel the pinch.

“Consumers are going to pay a little bit more for household goods,” he said.

--With assistance from Katia Dmitrieva.

To contact the reporter on this story: Deena Shanker in New York at dshanker@bloomberg.net

To contact the editors responsible for this story: Anne Riley Moffat at ariley17@bloomberg.net, Jonathan Roeder