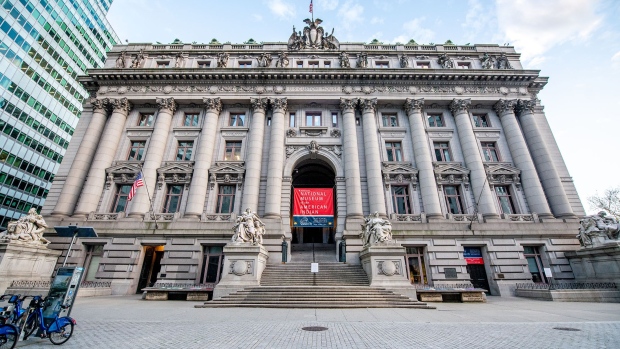 (Bloomberg) -- For decades, when the biggest names in corporate America went bust, they ran to one of two courthouses for protection. The historic Alexander Hamilton U.S. Custom House in lower Manhattan, or an unassuming office building with only a number for a name in Wilmington, Delaware.

One exudes charm and gravitas, the other low-key practicality. Together, they’ve hosted some of the most recognizable brands to ever fall from grace, from General Motors Corp. and Lehman Brothers Holdings Inc. in New York, to Trump Entertainment Resorts and RadioShack in Delaware.

Yet at the start of what experts say could be the biggest wave of corporate failures in recent memory, other courts have begun to challenge their dominance. A handful of federal judges in Texas and Virginia are rising in popularity with large companies, such as J.C. Penney Co. and J. Crew Group Inc., according a database at the law school of the University of California, Los Angeles and data compiled by Bloomberg.

The court in Houston, for example, is building a reputation with bankrupt energy companies -- a hot spot in the current downturn -- and using technological advancement like allowing lawyers to broadcast presentations in real time. Richmond’s handling of Circuit City’s complex case a decade ago put it on the map with retail chains.

The concentration of cases has long frustrated critics, who claim unsuccessful chief executives and the bankruptcy lawyers they hire prefer New York and Delaware because judges there favor corporations over unions, retirees and small-time creditors.

In one of the oddest political alliances in the U.S. Senate, conservative Texas Republican John Cornyn teamed with liberal Massachusetts Democrat Elizabeth Warren in 2017 on an effort to break up the duopoly.

“Firms don’t randomly file for bankruptcy in New York and Delaware,”said Jared Ellias, a law professor at the University of California in San Francisco. They are looking for an edge, which typically comes from being able to guess how a court will rule, he said.

There are 94 federal court districts in the U.S., but the bankruptcy code gives companies a choice of venue. They can file near their headquarters, the court closest to where the company has its most significant assets, or the state where they, or any of their subsidiaries, are incorporated. Modern corporations often have at least one unit incorporated in Delaware or New York, paving the way to file in those states.

Since 2001, for example, 58% of the 739 big, public companies that filed for bankruptcy chose Wilmington or New York, according to the database maintained by law professor Lynn LoPucki.

LoPucki, who practiced bankruptcy law before teaching it at UCLA, is among the most strident critics of letting the biggest corporations file just about anywhere they’d like. That freedom compels judges to compete for large cases, LoPucki claims.

Big cases can generate millions of dollars in fees for local lawyers who get hired to assist bigger, national firms. To attract that business judges may give companies what they want, even if it means bending the law to the breaking point, he said.

Asset prices appear to show that Delaware and New York judges are easier to predict. Ellias, the San Francisco law professor, compared debt and equity prices at the start of a case with prices at the end, after the business had either reorganized or liquidated and creditors knew what they would be recovering. The numbers were much closer for Delaware and New York courts than elsewhere.

“That would suggest investors are more able to predict accurately what the outcome will be,” Ellias said.

While the New York and Delaware venues continue to pull in a hefty portion of corporate cases -- Hertz Global Holdings Inc., for example, filed last month in Delaware -- the numbers so far this year show competition is rising. Only eight of the 24 big, publicly traded companies included in LoPucki’s database filed in New York or Delaware.

Even when looking at a broader set of business cases, the percentage going to Delaware and New York dropped to about 50% this year from 55% for the same period last year, according to data compiled by Bloomberg.

And the chief bankruptcy judge in Delaware indirectly confirmed the shift during a recent hearing, while talking to lawyers for battery recycler Exide Holdings Inc. about the company’s proposed sale schedule.

“You’re lucky because there is nothing else to do,” U.S. Bankruptcy Judge Christopher Sontchi said, joking about the light court docket he is facing this summer. “I might be able to accommodate you.”

A few years ago, judges in Houston and Richmond began adjusting the local rules to appeal to big bankrupt companies.

It’s mostly logistics, but it matters. Bankruptcy lawyers and their corporate clients like flexible deadlines and easy access to a judge when key legal rulings must be made in a hurry.

In 2018, Houston also began routing the biggest cases to either the head of the court, David R. Jones, or Marvin Isgur. Both judges have developed an expertise in complicated Chapter 11 cases, especially in the oil industry. That makes it easier for companies and their lawyers to study past rulings.

“As a court, the Southern District of Texas encourages innovation to increase the quality of our public service,” Jones, the district’s chief bankruptcy judge, said in an email. “That innovation has resulted in a set of complex case procedures that I believe are unmatched.”

Virginia, for its part, is emerging as a venue of choice for retailers. Since Circuit City, it has lured Toys ‘R’ Us Inc., J. Crew and Pier 1 Imports Inc.

For LoPucki, the rise of rival venues doesn’t improve the status quo. Richmond and Houston appear to be doing many of the same things to attract big cases that have made Delaware and New York popular, he said.

Others say it’s more about experience than favoritism. With most bankruptcy cases involving individuals and small companies, the handful of judges who emerge as shepherds of large cases will wind up attracting more of them.

What’s more, several high-profile judges who oversaw landmark corporate cases retired in recent years, including Robert Gerber and James Peck who handled the General Motors and Lehman Brothers cases in New York. That cleared the way for a new generation, some of them in different jurisdictions.

“All other things being equal, if you set up a system where the financial community knows that if you file in that court, you’re going to get a judge with expertise and predictability, you’ll see the result in increased filings there,” Gerber said. “It has nothing to do with favoring anybody.”

Former bankruptcy judge Bruce Markell said he is less concerned about Delaware and New York dominating so many big cases than in the past because technology has made it easier for the public to participate. But there is still a risk that competition for cases will make judges too accommodating, Markel said.

Nonetheless, the framework doesn’t look likely to change anytime soon. The U.S. Senate bill sponsored by Warren and Cornyn would have forced companies to go to court near their headquarters, or wherever their principal place of business is located. But the bill faced stiff opposition from business groups and, like all previous efforts, ultimately failed.

Former Delaware bankruptcy judge Kevin Carey, for his part, doesn’t buy the idea that he or his colleagues were too lenient.

“Courts are in the service business, but are not gas stations,” said Carey, now in private practice at the law firm Hogan Lovells. “Benches that preside over large Chapter 11 cases are subject to heightened scrutiny and are particularly sensitive to making the right decision, and do not hesitate to say ‘no’ to requested relief when called for.

“There is no a race to the bottom,” he said.