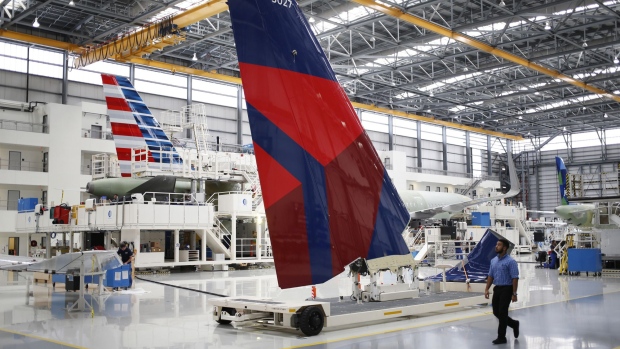 Employees walk past an Airbus SE A321 vertical stabilizer with a livery for Delta Air Lines Inc. on the production floor of the Airbus Final Assembly Line facility in Mobile, Alabama, U.S., on Wednesday, July 19, 2017. The U.S. Census Bureau is scheduled to release durable goods figures on August 3. , Bloomberg

Delta Air Lines Inc. is in talks with Airbus SE to delay at least 40 aircraft deliveries set for this year, as the carrier grapples with a travel market stricken by the coronavirus pandemic, said people familiar with the matter.

At the same time, Delta plans to bolster its cash stockpile by raising US$750 million from a sale-leaseback deal for nine of the remaining Airbus jetliners scheduled to be handed over, said the people, who asked not to be named because the discussions are private. The two transactions aren’t linked, meaning one could get done without the other, they said.

The financing involves five Airbus A321 planes, two A350 aircraft and two A330neo jets, the people said. Both deals follow through on Delta Chief Executive Officer Ed Bastian’s July pledge to tamp down capital expenditures on aircraft at least through the end of this year as the company works to stem losses from the collapse in demand for flights.

The belt-tightening measures by one of the world’s best-capitalized airlines underscores the pressure on Airbus and its U.S. rival, Boeing Co. Both manufacturers have been working furiously to preserve orders at a time when airlines have little need for new aircraft and undelivered jetliners are stacking up outside their factories.

The Atlanta-based airline has vowed to reduce capital spending by US$3.5 billion this year, in part by working with plane and engine manufacturers to “optimize the timing of our future aircraft deliveries,” according to a Delta filing in July.

A breakdown of the jets likely to be deferred wasn’t immediately available. As of June 30, Delta held US$14.2 billion in commitments for aircraft purchases, including US$2.35 billion in the second half of this year. The filing didn’t provide the number of jets to be handed over during the last six months of 2020.

Almost all of Delta’s outstanding orders are for Airbus planes, and the scheduled deliveries for all years includes 100 of Airbus’ A321neo, 27 of the A321, 32 of the A330neo and 22 of the A350 jetliners. Most of the airplanes on order are due to be added to the carrier’s fleet through 2022.

U.S. airlines are slashing spending and parking some jets as domestic passenger totals languish at about a third of last year’s levels. With the coronavirus pandemic also slamming demand for international travel, carriers have fortified their cash stockpiles as well.

Delta borrowed US$9 billion against its SkyMiles loyalty program in a deal announced last week. The airline, which had close to US$16 billion in cash at the end of June, is burning through about US$750 million a month, Chief Financial Officer Paul Jacobson said on Sept. 17.

The squeeze on cash has thrown airlines into intense negotiations with Toulouse, France-based Airbus and Chicago-based Boeing over whether and when to take delivery on new jetliners that were ordered before the pandemic hit.

Both planemakers have slashed jobs and production rates, though some analysts have said they’ll need to scale back further.

Sale-leasebacks and other financing tools have helped bridge the gap in some instances, allowing carriers to reap cash upfront from lessors, often in exchange for higher monthly rent payments.

To date, Airbus has managed to largely avoid order cancellations by postponing handovers or allowing customers to switch to jets that better suit their post-pandemic needs.

CEO Guillaume Faury said in July that almost no customers were taking deliveries as expected six months ago, and that the manufacturer was turning to promissory notes or advance payments in some cases to ensure airlines remained committed.

Airbus’ own outlook is worsening, with Faury stepping up warnings this week that the company may have to make forced job cuts as it targets the elimination of 15,000 positions.

--With assistance from Charlotte Ryan.