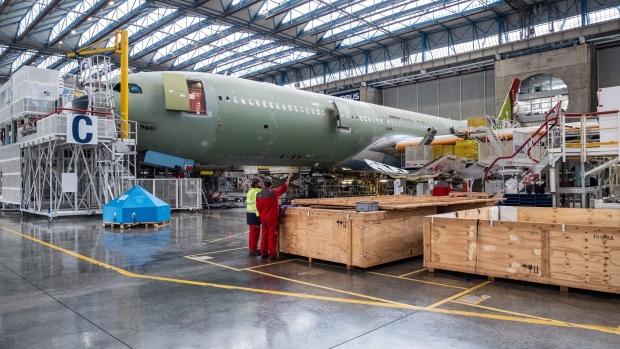 An Airbus A330neo passenger aircraft stands on the final assembly line at the Airbus SE factory in Toulouse, France, on Monday, Nov. 26, 2018. Known as the A330neo for New Engine Option, the model was originally scheduled to join the TAP Air Portugal fleet from the end of 2017. , Bloomberg

Airbus SE Chief Executive Officer Guillaume Faury stepped up his warning on forced job cuts at the European planemaker as a sharper-than-expected decline in travel leads carriers to push back deliveries of new jets.

“The situation has worsened” coming out of the summer high season, he said Tuesday in an interview on France’s RTL radio. “Airlines are in a more difficult situation after the holidays than what we were hoping.”

The industrial giant, whose cost-cutting plans call for the elimination of 15,000 jobs, will have to “adapt to the new environment,” he added, in particular on the employment front. The shares dropped as much as 2.7 per cent.

“It will be very difficult to stick with voluntary departures,” Faury said, reiterating that the company “is potentially at risk” if it doesn’t take the right steps. He pointed to a 40 per cent decline in the jet maker’s production and deliveries.

The European rival to Boeing Co., grappling with an unprecedented collapse in air travel because of the coronavirus, is already trying to entice workers to leave to limit tougher measures. France is braced to absorb about one-third of the planned cuts and Faury on Tuesday said talks with unions are aimed at using tools like part-time employment and state support of research and development to avoid forcing people to leave the company.

“Airlines aren’t canceling their orders but they aren’t honoring deliveries,” Faury said. “The delays on deliveries are very strong” because carriers don’t have the means to take ownership of the planes after passengers and revenue dried up.

Airbus’s 40 per cent reduction in output is holding but “I’m extremely cautious about how the crisis is developing and what is coming next with COVID,” he said.

While Faury already warned that voluntary measures were unlikely to be enough to meet Airbus’ job-cut target, he has raised the alarm further in recent weeks.

“No one can guarantee that there won’t be forced departures,” he said Tuesday. “We have lots of work to do and will do everything to avoid getting to that.”

The grim outlook for the industry was driven home Monday when Deutsche Lufthansa AG accelerated fleet and staff cuts amid mounting concern about the severity of the downturn.

Europe’s biggest airline will pull 150 jets by mid-decade, 50 more than in its previous plan, leading to more job cuts than the 22,000 already due to go. Air France-KLM Chief Executive Officer Ben Smith also weighed in, warning in an interview with L’Opinion that more cost cuts may be needed after travel demand dropped off at the end of the summer.