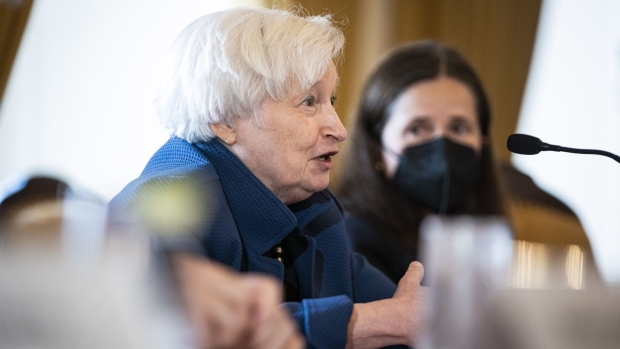 (Bloomberg) -- Congressional Democrats are urging the Treasury Department to ignore appeals by lobbyists to weaken the 15% minimum levy on domestic corporations.

Senators Elizabeth Warren, Angus King, Michael Bennett, and Representative Don Beyer, asked Treasury Secretary Janet Yellen and her staff to take an aggressive stance against companies that seek carve-outs or other modifications to the minimum levy.

“Strong implementation necessitates standing firm against requests to dilute the regulations in such a way as to undermine the clear intent of the law,” the lawmakers wrote in a letter obtained by Bloomberg News.

“The legislation also makes clear that the starting point for determining the profits subject to the corporate minimum tax are those listed in annual financial statements, most importantly those used for reporting to shareholders, such as a 10-K form.”

The request comes after several modifications were made to the 15% tax on corporations earning at least $1 billion in profits. As the provision moved through Congress, several changes were made to the levy to make it more valuable to manufacturers and private equity companies.

The 15% minimum levy, which was passed as part of Democrat’s Inflation Reduction Act, upends decades-old rules regarding the separations between accounting rules for financial statements and those for tax returns.

The new measure will require corporations to calculate their Internal Revenue Service liabilities using traditional methods, and applying a 15% rate to the profits they report to shareholders and paying whichever is higher.

The Treasury has yet to issue any guidance on the new law, though officials have said it is a priority in the coming months. The levy takes effect in 2023. Groups like the Chamber of Commerce and the Business Roundtable have sought a more business-friendly implementation.

The 15% domestic minimum tax is a separate provision from the 15% global corporate minimum tax that Yellen negotiated last year with approximaty 140 countries. Congress has yet to address the global minimum tax and it’s unclear when lawmakers might do so.