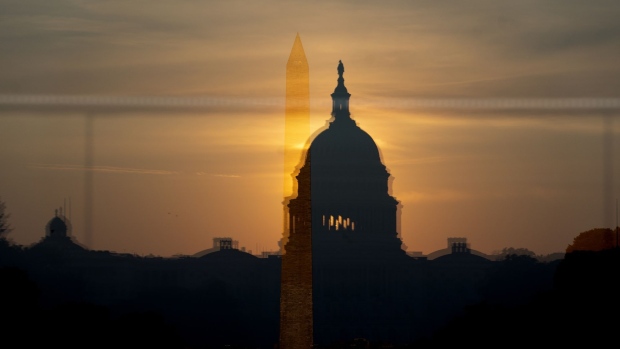 The Washington Monument through a reflection of the U.S. Capitol in Washington, D.C. Photographer: Stefani Reynolds/Bloomberg , Bloomberg

(Bloomberg) -- Congressional Democrats are moving forward with a stopgap spending bill needed to keep the U.S. government operating after Oct. 1, and they are looking at extending funding through Dec. 3, according to a person familiar with the plans.

The bill also is likely to carry billions in new emergency spending to address natural disasters and to process the influx of Afghanistan war refugees, something requested by the Biden administration earlier this month.

It is unclear if Democrats will try to attach a suspension of the $28 trillion U.S. debt ceiling to the must-pass bill. Treasury Secretary Janet Yellen has urged Congress to act on the debt ceiling or risk a U.S. payments default as soon as October. The Bipartisan Policy Center has estimated a payment default in mid-October to mid-November as extraordinary Treasury accounting measures run out.

Senate GOP leader Mitch McConnell rejected a direct appeal from Yellen for Republican cooperation. McConnell has repeatedly said Democrats will have to raise the debt ceiling on their own without GOP votes.

Democrats have decided not to use a fast-track budget process to raise the ceiling without Republican help, so attaching it to another major bill is one of the options on the table to try to win over Republican support.

The House Rules Committee announced Thursday that it will meet Monday to prepare the bill for a House floor vote likely next week. House Majority Leader Steny Hoyer last week told the Democratic caucus he was looking at the week of Sept. 20 for a vote on the stopgap bill, which is necessary because Congress has failed to pass any of the 12 regular appropriations bills for fiscal 2022.