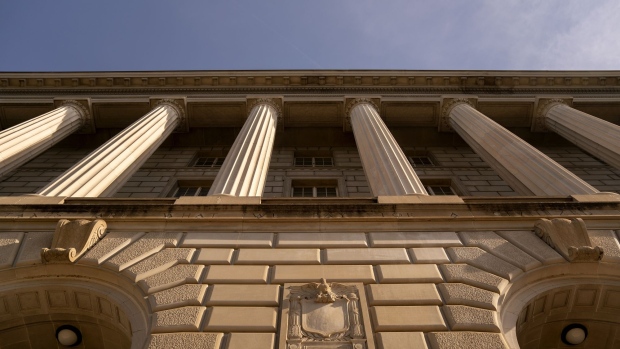 The Internal Revenue Service (IRS) headquarters in Washington, D.C., U.S., on Tuesday, April 27, 2021. President Biden and House Democrats are clashing over how much to prioritize an extension of an expanded tax credit for parents. , Bloomberg

(Bloomberg) -- Democratic negotiators are making a last-ditch effort to win backing for some form of President Joe Biden’s proposal to require banks to report some account flows to the IRS, in the face of opposition from lawmakers including Senator Joe Manchin.

The Senate Finance Committee had been working on a plan to require that banks disclose accounts with $10,000 of aggregate deposits or outflows over a year to the Internal Revenue Service, a move that could help the agency identify tax cheats. That would yield revenue to help pay for Biden’s sweeping social-spending bill.

Negotiators are now looking at ensuring that people with income below $400,000 a year would be exempt, according to an administration official speaking on condition of anonymity as the talks are private. That still may not satisfy objections from Manchin and others who have raised questions about privacy rights.

Ashley Schapitl, a spokeswoman for the Senate Finance Committee, denied an earlier CNBC report saying the item was nixed, saying “we are continuing to work on it.”

New York Representative Hakeem Jeffries, a member of Speaker Nancy Pelosi’s leadership team, said: “I know there’s some issues that people are trying to work through with respect to the bank reporting provision.”

“Unclear to me whether it stays in or comes out,” Jeffries said.

The original idea of having accounts with at least $600 of aggregate inflows or outflows over a year being reported to the IRS was met with skepticism from lawmakers. Treasury Secretary Janet Yellen repeatedly expressed frustration that the plan had been mischaracterized as requiring banks to report to the IRS on individual transactions in and out of accounts. The House left it out of its version of the tax-and-spending package.

But the idea got a fresh look as Democrats scrambled to find hundreds of billions of dollars of additional revenue to offset much of the cost of the social spending package. With Senator Kyrsten Sinema, another crucial swing vote, opposing increases to tax rates, Democrats had to examine alternatives. The Senate has been working on a proposal applying to accounts with $10,000 in cumulative flows.

Now lawmakers are again regrouping after Manchin, of West Virginia, said Tuesday that “no one should be in anyone’s bank account.”

The bank-reporting proposal prompted a wave of criticism by Republicans and bank lobbyists, proving to be one of the most controversial revenue ideas under consideration this year.

Democrats had made some changes to the proposal in recent weeks, such as excluding payroll deposits, to narrow the scope of the accounts that would be reported.