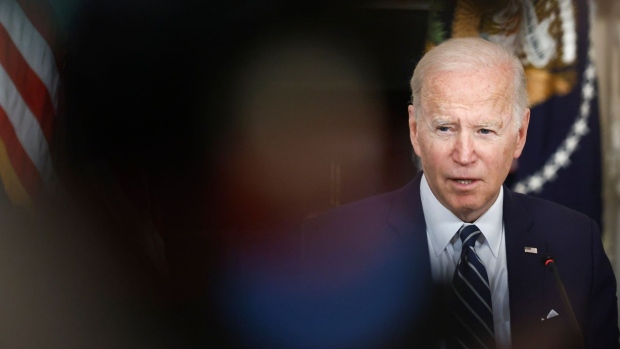 U.S. President Joe Biden during a meeting with inspectors general in the State Dining Room of the White House in Washington, D.C., U.S., on Friday, April 29, 2022. Biden is expected to discuss oversight, accountability and transparency during the meeting according to the White House. Photographer Ting Shen/Bloomberg , Bloomberg

The three Democrats, who have been leading the effort in the Senate, support $50,000 in student debt relief, which is five times what Biden has indicated he would support.

“I’m pushing him to do this in a way that we help the Georgia folks I’m running into everyday,” said Warnock, who is running for re-election in a hotly contested race for his Georgia seat.

Warnock said Biden “is receptive to getting this done.”

After the meeting, the trio of Democrats had an intense private conversation on the Senate floor. Warren, who made student debt forgiveness a pillar of her 2020 presidential campaign, looked agitated while Schumer kept shaking his head.

Warren wouldn’t comment on the discussion with Biden, but said afterward that she was still pushing for $50,000 in student loan debt to be forgiven for each individual.

“I want to see the maximum amount of debt relief possible,” Warren said in an interview. “Fifty thousand dollars would give immediate relief to tens of millions of families.”

Warren previously said that amount would do the most to help close the racial and gender wealth gaps.

While Democrats generally favor forgiving at least some of the debt, Republicans are opposed. A group of GOP senators led by Mitt Romney of Utah on Wednesday introduced legislation that would prohibit the administration from canceling student loan debt.

“This decision would not only be unfair to those who already repaid their loans or decided to pursue alternative education paths, but it would be wildly inflationary at a time of already historic inflation,” Romney said in a statement.

With legislation to wipe loans off the books unlikely, advocates have turned to the White House to provide relief.

Biden said that he was considering forgiveness of at least $10,000, but not as much as $50,000. The White House has signaled that people making more than $125,000 a year would likely be ineligible.

But the president hasn’t made up his mind about many details of the plan, including how much debt to forgive per borrower, people familiar with the matter told Bloomberg. And though White House officials have debated the contours of a forgiveness program internally for more than a year, there is no real consensus on the best path forward.