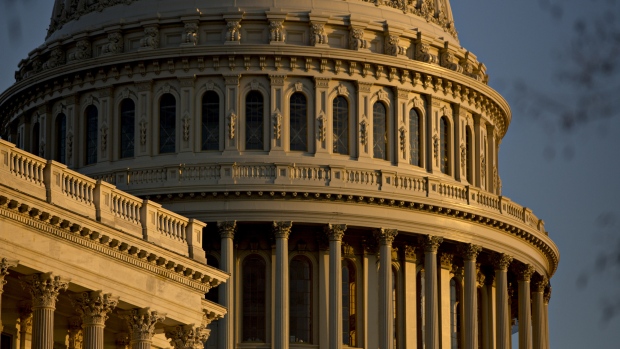 The U.S. Capitol stands at sunset in Washington, D.C., U.S., on Thursday, Feb. 8, 2018. A Senate vote on a bipartisan budget deal that would avert a government shutdown is being held up by a Kentucky Republican who objects to higher spending, raising the risk of a temporary lapse of federal funding if Congress cant act by a midnight deadline. , Bloomberg

Key Democrats warned that if their party wins a U.S. House majority in November, they will strongly consider rejecting a Trump administration rewrite of a North American trade deal that doesn’t include Canada and raise wages for U.S. workers.

The lawmakers said they’d closely scrutinize any agreement reached by the Trump administration, which is negotiating with Canada after completing a preliminary pact with Mexico to replace the North American Free Trade Agreement. President Donald Trump is threatening to exclude Canada, as trade talks between the two sides drag on in Washington.

Democrats said in interviews that a Mexico-only deal wouldn’t be acceptable and that any renegotiation of NAFTA needs to have tangible benefits for workers.

“We want to make sure people understand congressional authority here," said Richard Neal of Massachusetts, the top Democrat on the House Ways and Means committee, which oversees trade. “Canada should be in the deal. This should be a trilateral, not a bilateral deal.”

Any agreement would come before Congress next year -- after newly elected lawmakers take office.

To gain a House majority, Democrats need to flip 23 seats, a prospect that independent analysts say is within reach. The party will have a tougher time gaining two seats to control the Senate, where Democrats have 26 seats to defend, compared with just eight for Republicans.

Rejecting a deal would set up a high-stakes confrontation with Trump, who made rewriting trade agreements a centerpiece of his presidential campaign.

The White House last week gave Congress a required 90-day notification that it would be signing a revised version of NAFTA with Mexico and would include Canada only “if it is willing.” Canadian Foreign Minister Chrystia Freeland, who is back in Washington this week to meet with U.S. Trade Representative Robert Lighthizer, has said the talks are “constructive” but that Canada will only accept a deal that’s right for her country.

A pact signed in early December could be sent to Congress for debate probably no sooner than late March. At that point, under trade powers granted by Congress to the president, Congress would have 90 days to hold an up-or-down vote on the deal with amendments and without unlimited debate in the Senate.

The House Democratic leader, Nancy Pelosi of California, who would vie to become House speaker if the party wins a majority, last week said a Trump deal with Mexico only would be "woefully incomplete."

“Actually fixing NAFTA requires reaching a trade agreement with both Mexico and Canada that improves the wages, the working conditions and the well-being of America’s workers and farmers,” she said in a statement.

Other Democrats echoed Pelosi’s comments. “It’s nice if a deal raises wages for Mexican workers, but what does it do for American workers?” said John Yarmuth of Kentucky, the top Democrat on the House Budget Committee.

Representative Lloyd Doggett, a Texas Democrat who serves on Ways and Means, said Trump proposals to scrap trade arbitration panels that circumvent the courts is positive. But he said he doesn’t want expanded patent protections for drugs that are part of the agreement with Mexico.

Representative John Lewis of Georgia, another member of the Ways and Means panel, said any trade agreement would get “serious consideration.” But he added: “We will not forget our Canadian friends. We will not come down on Canada like this administration has.”

Democrats said the scrutiny they extend to the trade pact will be similar to more intense oversight they intend over Trump, should they win control.

“We are going to examine this guy closely on everything,” said Representative Jim Clyburn of South Carolina, the No. 3 House Democrat.

The Trump administration has been working closely with trade unions like the AFL-CIO during the NAFTA talks and approval from unions could be a key to getting Democratic support.

The Mexico trade proposal would impose new requirements on auto imports, including one specifying higher wages for workers. After initial praise of these provisions, AFL-CIO President Richard Trumka on Sunday called for Canada to be included, prompting Trump to denounce him on Twitter.

Bill Reinsch, a former congressional trade aide now at the Center for Strategic and International Studies and that if Republicans keep control of both chambers, any trade deal would likely be approved.

“If the Democrats take control of either body, the outlook is much more uncertain,” Reinsch said.

The Trump administration has threatened to pull out of NAFTA to gain leverage if Congress balks at approving any deal, but Democrats question his ability to do so. While NAFTA allows the U.S. president to withdraw officially from the deal after six months’ notice to Canada and Mexico, Congress would have to approve implementing legislation to raise tariffs and re-impose regulatory and customs barriers.

Edward Alden, a trade specialist with the Council on Foreign Relations, said Trump’s threat to withdraw would intimidate Democrats into going along with the deal.

“The reality is that for many Republicans and Democrats alike, the idea of Trump doing away with NAFTA is potentially far more toxic than rejecting any deal based on concerns with the details,” he said. “This is not an issue that Democrats are going to want to fall on their sword.”