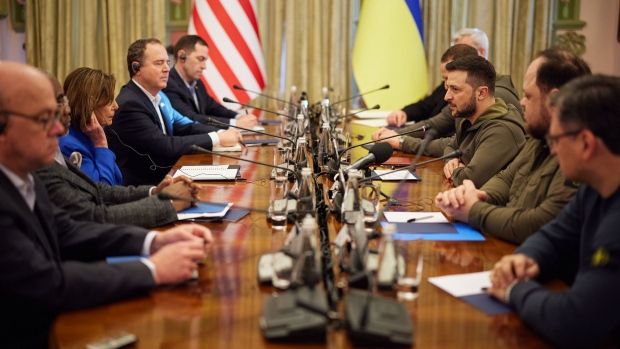 (Bloomberg) -- Democrats have drafted a $39.7 billion Ukraine aid package and plan to vote on it this week without attaching Covid pandemic funding, according to two people familiar with the plans.

President Joe Biden told lawmakers to separate the two requests to avoid stalling the Ukraine money, according to one of the people. The House could vote as soon as Tuesday on the Ukraine package, which is larger than the $33 billion Biden requested from Congress last month. Lawmakers are adding $3.4 billion in military aid and $3.4 billion in humanitarian assistance.

However, Republicans have not yet signed on to the plan. The extra military aid is less than the $8 billion increase that Senate Republicans had sought. The plan would need at least 10 GOP votes to pass the Senate. Blair Taylor, spokesperson for Senate Appropriations Committee top Republican Richard Shelby, said discussions are still going on.

Still, separating the $10 billion in funding for Covid vaccine and treatment may help break the Senate impasse over the aid. A deal early last month on the Covid bill ran aground after Republicans demanded an amendment vote barring Biden from lifting restrictions on migration over the southern U.S. border.  That bill will be on a separate track, according to one of the people familiar with the plans.

“That’s an active conversation, literally as we speak right now on Capitol Hill,” White House Press Secretary Jen Psaki said. “So, what I will tell you is that the president is absolutely committed to signing into law both the Ukraine funding and also Covid funding and he will continue to fight for both.”

Republicans had threatened to offer an amendment on the pandemic-related border restriction policy known as Title 42 to any Covid-19 funding bill. If the amendment is offered to the bill, it would likely pass given the opposition of moderate Senate Democrats to lifting the restriction on asylum seekers and their fears of a surge of border crossings after it ends on May 23, as planned by the Biden administration.

House Speaker Nancy Pelosi, who recently returned from a trip to Ukraine, said Sunday that Congress needs to act quickly on the Ukraine aid package to repel the Russian invasion.

“I think we will be able to do it as quickly as possible,” Pelosi said on CBS’s “Face the Nation” on Sunday. “We are very current on the needs and the urgency and, again, we will have bipartisanship as we go forward with it.”

Asked if Congress would pass the package this month, she said, “I think we have to.”