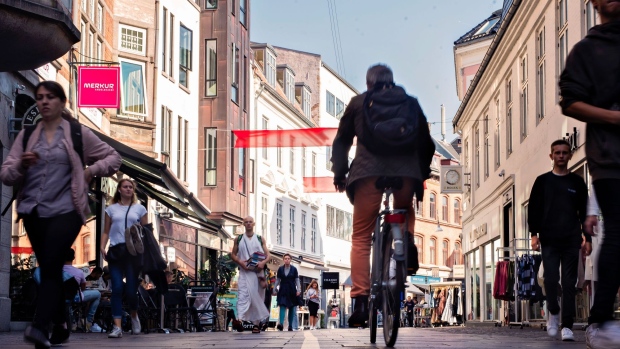 A cyclist and pedestrians make their way along a shopping street in Aalborg, Denmark, on Monday, Sept. 14, 2020. Denmark is re-introducing a number of coronavirus-related restrictions following the worst spike in infections since the height of the pandemic. , Bloomberg

Denmark’s government plans to reduce fiscal stimulus next year, citing an “incredible” shape of the Nordic economy in a budget deal agreed by the ruling Social Democrats and their supporting bloc in parliament.

Measures including a tax cut for home improvement services would have a limiting effect on the gross domestic product of 0.1%, the finance ministry said in a statement on Monday. Public construction projects will be cut by 2 billion kroner ($304 million).

Denmark has weathered the fallout from the pandemic as one of the best among the developed economies. With unemployment at 13-year low and inflation rate hitting its highest level in a decade, economists are voicing concerns about the Danish economy overheating, prompting calls from the fiscal policy watchdog to rein in spending.

“The Danish economy is now back in an incredible shape and there is a need for tighter fiscal policy,” the ministry said.

The budget law also included 1 billion kroner to the country’s health system, which is currently under pressure due to a labor dispute between the government and the nurses and a new wave of Covid-19 infection.

The Confederation of Danish Employers criticized the budget plan, saying it doesn’t address labor shortages and may even have a negative effect by removing labor, according to a statement.