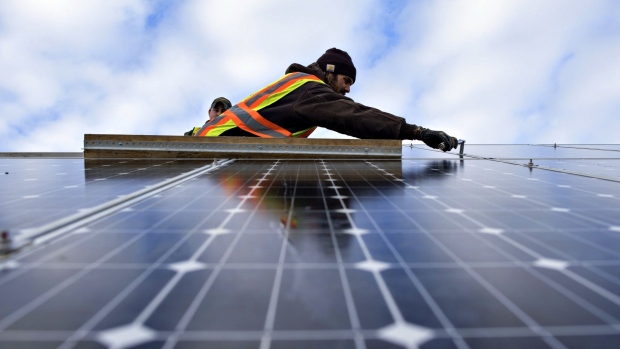 Dragonfly Solar contractor Aaron Anderson secures a solar panel during construction of a solar array for Heartland Power Cooperative in St. Ansgar, Iowa, U.S., on Friday, Jan. 23, 2015. Heartland Power Cooperative, one of over 900 electric cooperatives in the U.S., serves 5,200 members in northeast Iowa. The solar project will be comprised of 2,706 315-watt solar panels made by SolarWorld Corp., capable of generating approximately 852 kW of electricity. , Photographer: Bloomberg/Bloomberg

(Bloomberg) -- The world’s multilateral development banks must boost their green ambitions to stop carbon emissions from soaring in the most powerful economies, according to the Climate Transparency Report 2021.

Covid-19 lockdowns caused carbon dioxide emissions from the energy sector to fall 6% in 2020, but a rebound of 4% is projected across the Group of 20 nations this year. Argentina, China, India and Indonesia are expected to exceed their 2019 emissions levels before next year.

Governments channel financing through multilateral development banks, or MDBs, by providing direct funding and encouraging private investments. Steering this money away from high-carbon assets is crucial for meeting the Paris Agreement’s goals, according to the report.

Earlier this year, the G-20 called on MDBs to align their activities and investments with the 2015 Paris accord before high-stakes global climate talks in Glasgow, Scotland, kick off at the end of this month. They also were urged to provide new financial tools and funding instruments to boost green activities.

It’s not just about money. Access to technology is a major issue, said Erik Berglof, chief economist of Beijing-based Asian Infrastructure Investment Bank. “MDBs must become a platform to help bring together technology providers and those who use them,” he said.

MDBs should work with financial institutions and companies to reduce their carbon footprints, Berglof said. While MDBs have  made  commitments to become Paris-aligned, meeting those obligations will be a “very difficult process” requiring drastic changes, he said.

There has been some progress. In May, the Group of Seven nations pledged to stop using public financing for new coal power plants, while the U.S. stepped away from gas projects through MDBs. The European Bank for Reconstruction and Development vowed to stop investing in upstream oil and gas projects by the end of 2022 to align. China also committed to stop building coal plants overseas.

But G-20 nations are responsible for 75% of global greenhouse gas emissions. With COP26 just over two weeks away in Scotland, the report urged countries whose targets don’t align with limiting global warming to 1.5 degrees Celsius from pre-industrial levels to submit stronger ones.