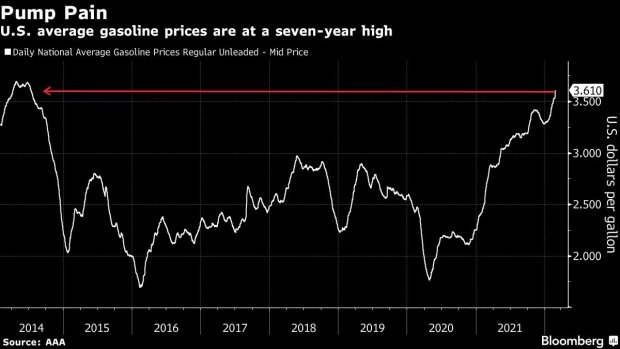 (Bloomberg) -- Devon Energy Corp. CEO Rick Muncrief has a message for President Joe Biden: He’d be happy to discuss the possibility of boosting oil output to help contain the surge in gasoline prices and inflation. But, he says, no one in the administration has reached out to him to discuss the matter at any point, something he finds puzzling as he watches Biden personally lobby OPEC to raise production.

“I’m a little mystified that there hasn’t been some dialog,” Muncrief said in an interview in New York. A request from the Biden team, he said, could make it easier for companies like Devon, one of the biggest explorers in the U.S., to boost output without angering shareholders who been have demanding investment discipline. “If they were to reach out and maybe be a little more collaborative, it might provide some cover.”

Muncrief is publicly expressing a frustration that has been brewing for months in U.S. shale circles. Russia’s invasion of Ukraine, which threatens to further choke off global supplies, only is adding to the sense of urgency. Brent oil, the international benchmark, soared to more than $105 a barrel on Monday and U.S. gasoline prices hit a seven-year high of $3.61 a gallon Sunday, up about one-third from a year earlier.

Biden’s push to make the U.S. a leader on climate change again has made it difficult for him to ask shale drillers to lift output, as Muncrief sees it. “It’s not been that long ago that we were asked to drill less, not more. They need to be talking about what is it they would really like U.S. producers to do.”

Devon, like most publicly traded shale companies, has been reluctant to boost production, promising to limit growth to 5% this year. That tack served the company well last year. Its stock soared 178%, reversing a six-year slump that saw its price plunge by more than 50%.

Muncrief, 63, reiterated throughout the interview that the shale giant will be disciplined -- he used the word “thoughtful” multiple times -- as it looks to expand. And even if they were to want to grow more now, it’d be difficult, he said. It’s taking about twice as long as normal to get a drilling rig on site and then start pumping the oil, while the company estimates its costs to carry out projects will jump about 15% this year.

All of which puts him in a difficult spot as he watches what’s going on in Ukraine and in global oil markets.

“You’ve made a promise to be more disciplined, getting cash back to shareholders with these dividends,” Muncrief said. “The question is: Are you going to keep your promise or are you going to be patriotic?”