HALIFAX -- DHX Media Ltd.'s shares closed up more than 10 per cent Tuesday after it announced a deal with a division of Global Brands Group to boost distribution and sales of its Peanuts brand in China and elsewhere in Asia as the final step of its strategic review.

The children's entertainment company said late Monday it has also suspended its quarterly dividend, cut staff, and streamlined operations as part of the review it started in late 2017 as the company struggled with debt and poor financial results.

Halifax-based DHX said the dividend cut will free up $10 million a year while operational changes will save about $11 million a year that it can put towards debt and future content.

The news helped send the company's share price to as high as $1.76 before closing up 14 cents or 10.3 per cent at $1.50 on the Toronto Stock Exchange. The company's stock plunged by a third to $1.13 in mid-September to a six-year low after a weaker-than-expected preview of its fourth-quarter results.

Going forward, the company will focus on its WildBrain business to capitalize on the rising popularity of YouTube for children, and on using its stable of shows and characters to produce premium original content for major streaming services.

"We are well-positioned to enter our next stage of growth, focused on what we identified during the strategic review as the two largest opportunities for kids' and family content," said executive chairman Michael Donovan in a statement.

DHX said China and Asia hold the potential for significant growth of the Peanuts brand. The company said it expects a 35 per cent increase in revenues for the brand in the region over the length of the deal.

The company sold a 39-per-cent stake in the Peanuts entertainment business to a Sony Corp. division for US$178 million in May, having bought 80 per cent of the business for US$345 million a year earlier. 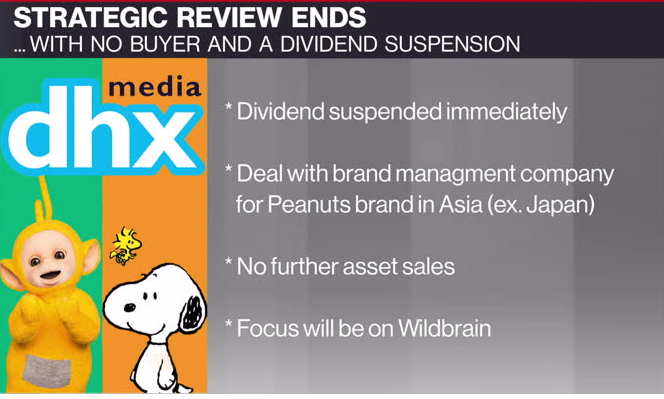