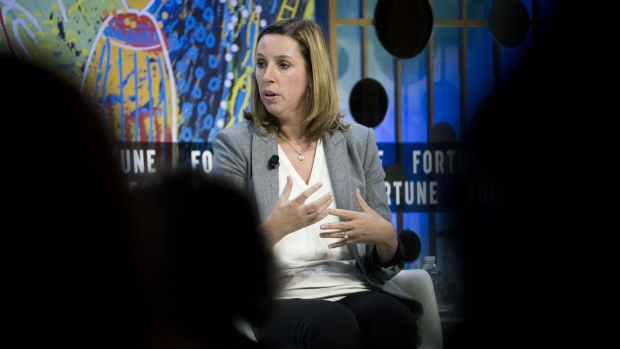 Dick’s Sporting Goods Inc. named Lauren R. Hobart as its next chief executive officer, putting her among the rare women to lead a large corporation.

The sporting-goods retailer also released third-quarter earnings Tuesday, reporting an adjusted profit of US$2.01 a share. That topped analysts’ estimate of US$1.05, as compiled by Bloomberg. Same-store sales surged 23 per cent.

Investors sent Dick’s shares down as much as 5.3 per cent in New York trading, after six straight sessions of gains. The stock was off 0.6 per cent to US$58.47 at 2:39 p.m., having risen 19 per cent this year through Monday.

Stack, 65, said in the statement that he’ll continue to lead merchandising, product development and certain strategic initiatives while supporting Hobart as an adviser.

Hobart joined Dick’s from PepsiCo Inc. in 2011 as chief marketing officer and became president in 2017.

On the company’s earnings conference call Tuesday, executives said quarter-to-date sales through this past weekend have increased by a high-teens percentage rate, slowing from the third quarter.

“We are still chasing in several key categories,” Hobart said of inventories on the call, “and if you were to ask whether we have left some sales on the table, it’s likely that we have.”