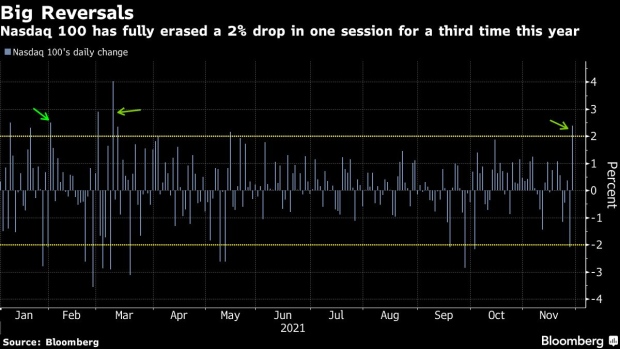 (Bloomberg) -- It’s shaping up to be a historic year for dip buyers feasting on big pullbacks.

Up 2.3% Monday, the Nasdaq 100 more than recouped Friday’s 2.1% rout. That’s the third instance in 2021 when investors have piled into the index after a beat-down and erased all the damage the very next day. There were only three such dramatic reversals in the prior two decades.

Chalk it up to conditioning: What seems catastrophic one day turns into a buying opportunity the next, leading to ever-greater risk tolerance among investors who have yet to lose a cent going long when others are panicking. While quick reversals have been a fixture of three straight banner years for the S&P 500, they’re also ingredients in bubbles, when every threat to an appreciating market is viewed as empty.

Big bargain hunters have included the retail crowd, who were among the first to scoop up shares during the 2020 pandemic selloff. While some Wall Street strategists warn the complacency will one day face a reckoning, for now, the trade has rewarded bulls handsomely.

“A lot of these individual investors learned about the lesson in the last bear market, which is, a bear market lasts three and a half weeks and the Fed will step in and bail everyone out,” Emily Hill, founder of Bowersock Financial Advisors, said in an interview on Bloomberg TV with Jonathan Ferro. “These retail investors are very aggressively buying the dip and I see that continuing for awhile.”

Stocks bounced back as investors reassessed their worst-case scenarios for the omicron strain. While questions remain about how contagious the variant might be and its sensitivity to existing vaccines, the initial scare that prompted an exodus from all risky assets is abating.

The S&P 500 has yet to fully recoup its post-Thanksgiving loss, though its advance extended this year’s trend of rebounding right after big down days. Since January, the index has posted five separate one-session tumbles of at least 2%. Four of them saw stocks rising the following day.