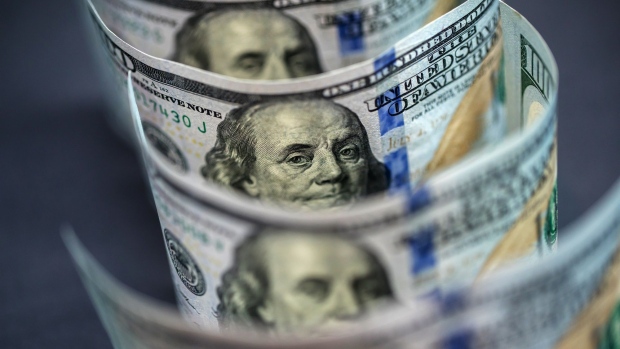 (Bloomberg) -- China’s latest threat to bar companies with ties to U.S. officials who visit Taiwan points to a weakness for Beijing in its sanctions battle with Washington: It can control its own borders, but the greenback rules the world.

In recent months, the Trump administration has levied sanctions against more than a dozen Chinese officials and restricted access to scores of the country’s companies. The penalties have caused credit card headaches for Hong Kong Chief Executive Carrie Lam and, according to the South China Morning Post newspaper, forced the former British colony’s police credit union to relocate an estimated $1.4 billion of assets to Chinese banks.

Meanwhile, the “firm countermeasures” that Beijing has threatened against U.S. officials including Senators Marco Rubio of Florida and Ted Cruz of Texas have yet to be felt across the Pacific. None of the dozen American individuals sanctioned since July have received notice of what the penalties would entail, other than the assumption that they wouldn’t be welcomed in China.

“I wear it as a badge of honor, but Beijing’s actions don’t have any impact on me,” said Rubio, a frequent China critic who has been named in sanctions announcements twice this summer.

While China has calibrated its response to minimize the risk of further escalation by President Donald Trump, it’s also limited by the U.S. dollar’s dominance in international finance. The greenback accounted for almost 40% of all SWIFT transactions in July, compared with less than 2% for the renminbi, as the Communist Party resists calls to ease currency controls. That makes it more difficult for multinational banks -- including China’s state-run lenders -- to avoid compliance with U.S. sanctions.

The U.S.’s dollar advantage could become even more important if the Trump administration sanctions financial institutions in Hong Kong as authorized by congressional legislation in July, or takes direct action against Chinese banks. Beijing’s strongest weapon remains blocking access to its vast market: Hu Xijin, editor-in-chief of the party’s Global Times newspaper, said Wednesday such a move was being considered for companies with ties to U.S. officials who visit Taiwan.

“China doesn’t have too many tools to implement the sanctions because the U.S. payment system is so prolific and pervasive,” said Edwin Lai, a Hong Kong University of Science and Technology economics professor who specializes in renminbi internationalization. “China is disadvantaged in the sanctions game because its payment system is underdeveloped and yuan internationalization is decades away.”

The U.S.’s financial sanctions also carry fewer risks of backfiring than China’s usual tactic of cutting off market access. The Chinese economy is still reliant on foreign investment and Beijing is wary of moves that could scare off multinationals and scuttle its phase-one trade deal with Trump. Chinese diplomats have in recent weeks expressed a desire to de-escalate tensions ahead of the U.S. presidential election on Nov. 3.

Both sides have so far steered clear of sanctioning top officials, with Trump ruling out measures against potential targets including Vice Premier Han Zheng, people familiar with the matter said in July. While the U.S. has penalized Lam and Politburo member Chen Quanguo over alleged human rights violations, China has targeted lower-level officials such as Ambassador-at-Large for International Religious Freedom Sam Brownback and six members of Congress.

Cruz spokeswoman Maria Jeffrey said the exchange showed that the U.S. has a much stronger sanctions framework, including having a procedure for notifying people that they’ve been targeted. “I guess he can’t go there anymore,” Jeffrey said. “When we ban someone from visas, there’s a human whose job it is to send them a letter saying, ‘Don’t bother coming.’”

The latest U.S. decision to sanction 24 Chinese companies over their alleged roles building military facilities in the disputed South China Sea signals further expansion of the strategy. Major lenders with operations in the U.S., including the Bank of China Ltd., China Construction Bank Corp., and China Merchants Bank Co., have taken tentative steps to comply with U.S. sanctions.

Further escalation could involve seizures of U.S.-based assets, Yu Yongding, a senior fellow at the Chinese Academy of Social Sciences, told a forum organized by the Beijing News newspaper on Aug. 12. “This possibility can’t be ruled out,” Yu said, citing penalties imposed on the Bank of Kunlun in 2012 over Iran ties.

The U.S. also has the nuclear option of cutting China off from the U.S. dollar system, said Ding Shuang, chief economist for greater China and north Asia at Standard Chartered Plc, which would leave China unable conduct any transactions in dollars. This option was unlikely to materialize given the financial damage it would cause to U.S. companies based in China and Hong Kong, Shuang said.

“The danger of this occurring is one of the key reasons that China may accelerate the renminbi internationalization,” Shuang said. “U.S.-China tensions targeting the financial industry has been the catalyst in re-accelerating the momentum for renminbi internalization.”

China has other tools to deploy, if ties deteriorate badly enough to justify broader economic damage, including unloading Treasuries or blocking exports of rare earths and other key manufacturing components. Beijing could also roll back cooperation on sanctions against North Korea and Iran.

For China to gain global financial leverage, it needs to open its capital account to encourage greater use of the yuan, said Scott Kennedy, a senior adviser and trustee chair in Chinese business and economics at the Center for Strategic and International Studies. The cost would be giving investors some ability to influence China’s exchange rates.

“Until Beijing changes the underlying calculus, China will not be able to incorporate financial restrictions into its coercive diplomacy toolkit,” Kennedy said.