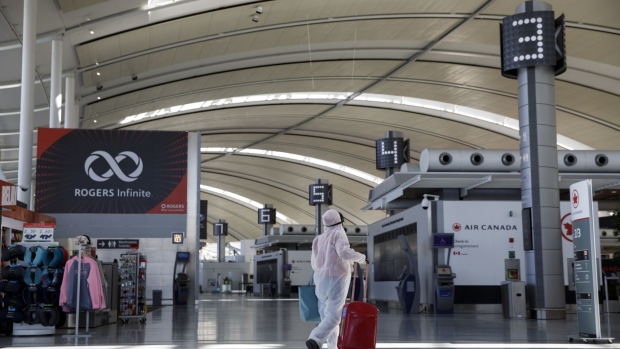 A traveler wearing a protective suit and mask walks through a terminal at Toronto Pearson International Airport on April 8. Photographer: Cole Burston/Bloomberg , Bloomberg

(Bloomberg) -- It’s been more than three weeks since the governments of Canada’s three most populous provinces told their 28.4 million residents to hunker down at home and wait out the coronavirus.

No one is declaring success yet. But the measures appear to be working, even if policy makers are loath to say so. The three provinces, which have three-quarters of Canada’s people and saw its first virus cases, have recorded just 1.2 deaths from Covid-19 per 100,000 residents.

That compares to 32 for New York, 10 for Michigan and 6 for Washington, states that share a border with those provinces.

Canada is still logging about 1,000 new cases a day, most of those in Ontario and Quebec. But the speed at which the caseload has been doubling has been cut more than in half, says Colin Furness, an infection control epidemiologist and assistant professor at the University of Toronto. Even with all the noise around the data -- testing being the biggest one -- the numbers suggest the famous “curve” of new cases is beginning to flatten.

“My picture shows that we are flattening,” Furness said, referring to graphs showing the slope of the rate of increase over time intervals ranging from one to seven days. At its worst, the number of cases in Canada was increasing by two-and-a-half times every three days. Now it’s only doubling every seven. “In this tug of war we are gaining ground but we haven’t won -- and we are not close to winning yet.”

That may be why politicians have avoided talking about the shape of the curve, stressing instead the importance of Canadians staying the course.

“We have a glimpse into what is effective, and what is working in other countries, to bend the curve,” Prime Minister Justin Trudeau told reporters Wednesday, noting that he will continue to work from home, except for high profile meetings. “The best outcome comes when there is maximum social distancing. We don’t know when this will be peaking but if we keep doing this we will get through this much quicker.”

Around the world, the benefits of social distancing are slowly becoming more evident. In San Francisco’s Bay Area, where some of the earliest, most aggressive steps were taken to keep people home, hospitals haven’t seen nearly the rate of infection as New York, where a standoff between the mayor and state governor delayed the shelter-in-place decision by several days. Meanwhile in Sweden, where policy makers are trying a laxer approach, cases are starting to spike.

Aggressive social distancing measures, coupled with a compliant population, may also explain Canada’s low death rate, according to Furness. Also, those most likely to die are the ones most likely to take the measures seriously. “I have elderly people asking about protocols for touching their mail. People who are thinking like that aren’t going to get sick,” Furness said by email.

In the U.S., “shelter-in-place” orders have been patchier and mixed messages -- including from President Trump over things like masks -- may be less compelling. Poverty may also play a role, if it leads to more multigenerational living, Furness said.

And there may be other factors. In British Columbia, for example, officials have flagged the fact that ventilating people early -- because there is still capacity -- improves outcomes.

Quebec, home to about 23% of the country’s population and half of confirmed cases, has said it expects the pandemic to peak around April 18. Premier Francois Legault struck a hopeful note on Wednesday, highlighting a recent stabilization in the pace of hospitalizations and calling on the province to stick to guidelines a while longer.

“Data from the last days make me optimistic; we are seeing the light at the end of the tunnel, we are winning this battle together,” he said during his daily briefing. “We just need one last little push to be certain we can begin to get out of this crisis and see the start of normal life again quickly.”

In Ontario, health authorities have said whether the province sees 3,000 or 15,000 deaths depends on how well residents continue to keep their distance as the virus could be a problem for up to two years. “How this outbreak unfolds is in the hands of the public,” Dr. Peter Donnelly, President and CEO of Public Health Ontario, said last week.

While the province saw its biggest single-day surge in new cases yet on Thursday -- an 11.6% increase -- it also increased testing by 25%, Furness noted. “A bit more of the iceberg is showing but that doesn’t mean the iceberg is getting bigger.” Premier Doug Ford has ordered officials to increase testing from just more than 3,000 a day to 13,000.

Early on, British Columbia had seemed poised to become a major epicenter of the virus when a major outbreak in a nursing home in Vancouver led to the nation’s first Covid-19 death and its first confirmed case of community spread.

Yet in subsequent weeks, the virus’ march across the Pacific Coast province has more closely resembled that of South Korea than Italy, according to a model released in late March by the provincial government. It indicated that physical distancing and travel restrictions had helped slow the spread starting around March 21, when the rate of growth in average daily cases halved to 12% from the 24% initially projected.

Still, amid rising concerns that the Easter weekend could set off a new spate of infections, British Columbia on Wednesday closed all provincial parks to discourage people from traveling.

“It is no time for us to let up at all,” said Dr. Bonnie Henry, the provincial health officer said, imploring people to stay home. “We need to make sure that we consider the impact that such a misstep could have on everything that we have done.”

Policymakers in Manitoba were also cautious, despite a relatively low number of new cases. “It concerns me that Manitobans might interpret that as a sign we can lower our guard,” Dr. Brent Roussin, the chief provincial public health officer said Wednesday at a video briefing with media. In Manitoba’s case, it’s too early to tell if the curve is flattening, he added.

Even if the national curve is getting flatter, keeping it that way will be a challenge. In his address to the nation on Wednesday, Trudeau reiterated that Canada must figure out how to keep the infection rate under control until a vaccine is available, which could take a year or longer.

“We will be calibrating very carefully our behaviors as a country, as a society and as an economy to manage the existence and persistence of Covid 19,” said the prime minister.

Given the length of time it will take to develop and produce a vaccine, Furness believes widespread testing for antibodies will be an important intermediate step. Pin-prick testing at airports, or “immunity passports” may become the new normal. In the meantime, he says, everyone needs to resist the urge to loosen social distancing measures.

“That would be a giant mistake.”