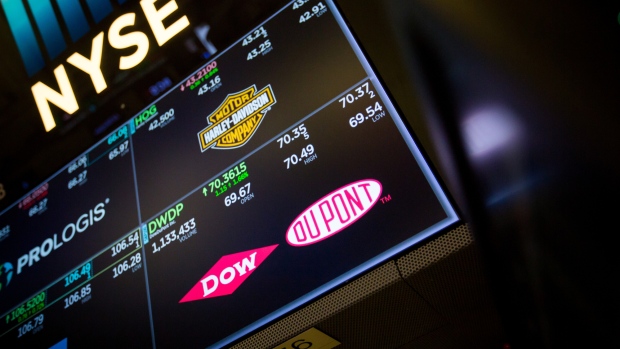 (Bloomberg) -- DowDuPont Inc. sought to reassure investors that its planned spinoff of one of the world’s biggest plastic makers will be unscathed by a groundswell of global concern about pollution.

Jim Fitterling, who will lead the new company as chief executive officer, waved away worries that protests against plastic trash will weigh on the new stand-alone operation’s growth plans. He also outlined financial targets for the company, to be known as Dow, which include paying the highest dividend in the chemical industry as a share of earnings.

“The growth trends are going to continue,” he said in New York on Wednesday ahead of an investor presentation. “We’ve seen these challenges since the ’80s and we are still growing” at 1.4 times global gross domestic product, he said.

Plastics are facing pressure in both the near and long term. The company last week said it expects earnings from making polyethylene, where Dow is a global leader, to drop by more than half in the fourth quarter amid surplus production and volatile feedstock costs. Meanwhile, images of plastic debris clogging the ocean and harming marine life have inspired cities and countries to ban some plastic products such as straws and to enact recycling mandates around the world.

DowDuPont advanced 3.1 percent to $59.83 at the close in New York amid a broad market rally. The shares have fallen 16 percent this year, compared with the 7.5 percent drop of a Standard & Poor’s index of materials companies.

As of its April 1 separation from DowDuPont, Dow will be a smaller company more tightly focused on manufacturing, with packaging and plastics accounting for half of revenue. The seed and pesticide division that formed part of its predecessor will be spun off separately as Corteva Agriscience.

Dow, already the world’s largest producer of polyethylene, used in grocery bags and food containers, expects to boost plastics production by 1.4 million tons a year. The increased revenue will contribute to its plan to boost earnings by about $3 billion with the help of plant expansions and cost cuts, Fitterling said. Polyethylene plants globally will run harder over the next two years to meet rising demand, Diego Donoso, plastics business president, told investors Wednesday.

Dow aims to return 65 percent of net income to shareholders through dividends and share buybacks.

“Dow will be the best dividend payer,” among companies on a Standard & Poor’s benchmark index for the chemical industry, Fitterling said.

The European Union this year required all plastic packaging to be recycled by 2030, and the American Chemistry Council, an industry group, has set a goal of recycling all U.S. packaging by 2040. Plastic bans in India are already eroding demand, said Robin Waters, a director at IHS Markit and co-author of a study on plastics sustainability.

The blowback may slow growth in demand for prime resin, mostly because of increased recycling, although gains will still outpace the global economy, Waters said. While there have long been efforts to reduce plastic waste, “something is different this time,” he said, noting the role of social media in drawing attention to environmental harm.

Plastics demand will continue to grow as electric-vehicle makers replace metals to improve mileage and as a growing middle class consumes more packaged foods. About 275 million tons of plastics will be used in packaging annually by 2040, said Paul Bjacek, principal director of chemical research at Accenture, a consultancy.

But as plastics demand triples over the coming decades, half the growth forecast by Accenture may come from recycled resins rather than the virgin materials Dow has invested billions of dollars to produce, Bjacek said.

Fitterling said he “doesn’t imagine” Dow becoming a recycling company. Still, the company is exploring ways to adjust. Dow already makes chemicals to help recycled resins to be used more widely, and it’s developing catalysts and processes that allow food pouches to be made from one polymer, rather than the eight layers often used now. That would make food packaging as easily recyclable as a polyethylene grocery bag, the CEO said.

Dow is also among those working on ways to break plastics back down into basic chemicals that could then be reused as feedstocks for making virgin plastics. The cost is currently too high to be economically viable, though, “I think it’s very possible,” Fitterling said.

Plastics will always be in demand because their light weight relative to strength make the environmental footprint smaller than any competing products, such as metal and glass, he said. With 1.5 billion people forecast to be added to the planet and a rising middle class consuming more packaged goods, Fitterling said plastics are essential for meeting the United Nations sustainable development goals.

Plastic bans are ineffective because they target a “very small fraction of the problem,” he said. About 90 percent of the marine debris that makes headlines comes from 10 rivers in Asia, particularly the Yangtze in China, he said. Improving waste management on land and cleaning up the ocean garbage patch should be the priority, and Dow is among those working to solve the problem, he said.