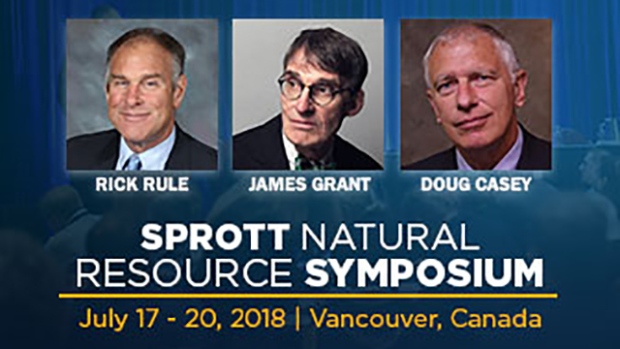 The Sprott Natural Resource Symposium at the Fairmont Hotel Vancouver , Image courtesy of Market One Media

The old business adage that the key to success in the markets is to “buy low, sell high” may be shop-worn, but that doesn’t make it any less true.

Given the highly cyclical nature of the precious metals and commodities markets, investors need to have enough risk tolerance to buy during bear markets and enough clear-headedness to sell during bull markets. In other words, “buy low, sell high” is easy to say, but hard to do.

Currently, the gold market is facing significant headwinds from a strong U.S. dollar, which is a product of the steady raising of interest rates by the U.S. Federal Reserve. Commodities like copper and zinc would normally be doing well, given the robust nature of global economic growth. However, the Trump Administration’s penchant for trade wars has thrown the commodities markets into turmoil.

Now in its fifth year, The Sprott Natural Resource Symposium 2018 aims to provide investors with guidance on how to navigate the current environment. Held July 17-July 20, 2018 at the Fairmont Hotel Vancouver, the symposium will include presentations from industry analysts, industry entrepreneurs, newsletter writers, and public company executives.

A Contrarian Argument for Attending

When the commodities markets are down, it can create a lack of investor interest in the sector. But, according to Rick Rule, the symposium’s host and the President & CEO of Sprott U.S. Holdings Inc., it’s exactly that lack of interest that should motivate investors to attend.

“There is no industry as cyclical as the commodities business,” says Rule, “and for the astute speculator, a different name for a bear market is a sale.”

Rule is particularly enthused about this year’s lineup of speakers. “We’ve got top-flight commentators like Jim Grant and Doug Casey,” says Rule. “We’ve also got entrepreneurs like Robert Friedland, and the opportunity to meet with dozens, if not hundreds, of executives from publicly traded resource companies.”

It’s an event designed to give investors a leg up on the next bull markets for precious metals and commodities. All companies on the exhibitor list have been vetted by the Sprott organization. “That doesn’t guarantee all their stock prices will necessarily go up,” says Rule, “but it does tell you that every company on our roster has been through a rigorous due diligence process.”

Getting to Be A Fly on the Wall Among Seasoned Speculators

The symposium will feature four days of presentations from commentators, analysts and executives. More importantly, though, from Rule’s perspective, is the opportunity to be a fly on the wall for the myriad interactions that take place in between presentations and on the exhibitor floor.

“I personally have found that the best part of the conference is the chance to tag along with competent investors and watch them question the companies,” Rule comments. “The ability to lurk among company-builders like Robert Friedland and Ross Beaty is truly unique.”

For speculators and investors seeking market intel, this event offers the chance to rub shoulders with leaders in the commodities industry and to learn how to make the most of the current market situation.

Meet the Next Generation of Company Builders

Another feature of the symposium, which Rule says is often overlooked, is the opportunity to build your network with the next generation of commodity company builders. He notes that “in my own investing life, it was valuable to align myself with the generation of entrepreneurs in their 30s and 40s when I was in my 30s. Now that my generation is in their 60s and 70s, we’ve often found those relationships built in our younger years were what forged our success.”

Turning Market Turmoil to Your Advantage

As to the gold market, Rule likes it for the long-term, although he’s cautious about the short-term prospects for the yellow metal. “In the very, very short term, the strength of the U.S. dollar and ability of Fed to let interest rates go up, is bad for gold. In the longer term, I predict faith in the U.S. dollar will deteriorate and gold will do well,” say Rule.

On the subject of commodities, he remains hopeful that cooler heads will eventually prevail, and governments will realize that trade wars are damaging to everybody.

For investors seeking guidance on how to turn this market turbulence to their advantage, the Sprott Natural Resource Symposium is designed to deliver exactly that.