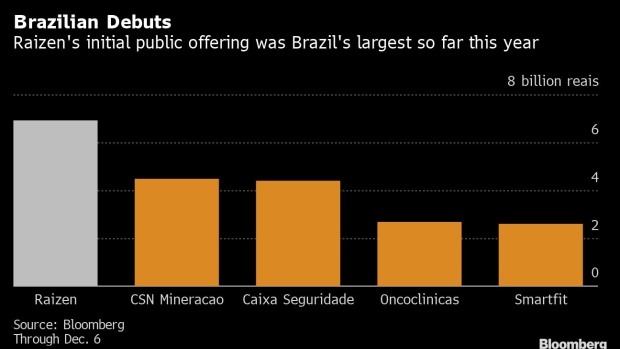 (Bloomberg) -- Brazil’s IPO boom has ground to a halt.

With interest rates soaring, the economy stagnating and equity markets sinking, dozens of companies have put the brakes on plans to go public. Not a single deal has been carried out in Sao Paulo since early September. In 2021, 48 Brazilian companies raised a record 65 billion reais ($11.4 billion) as part of a global bonanza in equity offerings, according to data compiled by Bloomberg.

The three-month drought, according to bankers and analysts, has all the markings of the start of a prolonged slump in the IPO market here. That’s because the biggest concern of all for investors -- mounting political tensions ahead of what is widely expected to be a bruising presidential election next year -- is just starting to come into view now. Some bankers say there could be as few as 10 IPOs next year.

“A significant decline is expected given that Brazil will face an election year and growing volatility,” said Roderick Greenlees, who heads investment banking at Itau BBA, the top underwriter for Brazil IPOs this year. The Sao Paulo-based bank sees between 10 to 20 listings in 2022.

There are, to be clear, expectations of a slowdown in the IPO market across the globe. As stock market rallies cool and central bankers start to talk openly about raising rates from London to Washington, few predict 2022 will look anything like 2021. But in Brazil, the end of the listings rush came quickly.

In addition to a presidential election, political turmoil over fiscal tightening in Latin America’s biggest economy has already started tormenting dealmakers. Add to that the collapse in the local stock market this year. With a decline of 10%, Brazil ranks among the world’s worst performers.

As the country plows ahead with a sharp rate hike to tame inflation and traders brace for what may be a highly polarized vote next October, dozens of companies that had started proceedings to go public are backing out on the deals.

Proceeds from IPOs across the globe have already surpassed $600 billion this year, shored up by stimulus from central banks and a rebound in corporate earnings. Still, the number of scrapped listings piled up in the past few months as global investors deal with growing risks including surging inflation and a new coronavirus variant.

When 2021 kicked off, bankers rushed deals in Brazil thanks to a combination of low funding costs, a fast-growing local asset-management industry and hopes the country would rebound from the virus-induced economic plunge. The growing participation of retail investors in the stock market also fueled the IPO fever, with mom-and-pops buying up to 60% of some listings.

As the overall stock market plunged, so did the average performance of Brazilian IPOs this year -- the latter to a 23% decline, underperforming the broader market. Shares in services marketplace GetNinjas and home decor retailer Westwing Comercio Varejista are down 77% and 73% since their debut, Bloomberg data show.

Despite the political jitters, some transactions are expected to move forward. Nu Holdings, the digital bank backed by Warren Buffett’s Berkshire Hathaway Inc., is slated to debut this week in New York and other Brazilian issuers, such as payments-services provider Ebanx, may tap the U.S. market for a broader pool of investors.

The end result would be a greater balance between Brazilian listings on the local exchange and listings abroad than in 2021 when most companies listed at home. Potential deals could come from sectors such as health care, infrastructure and technology, Itau’s Greenlees said.

Still, even though Brazilian IPOs are likely to become more scarce, some publicly-traded companies may carry out massive share offerings next year, including the sale of Novonor’s stake in petrochemical firm Braskem. Utility giant Eletrobras may be privatized through an equity offering, but will need to overcome obstacles including Brazil’s audit court, which needs to okay the transaction.

All said, including follow-on offerings, Brazilian share sales may total up to 120 billion reais next year, according to Itau BBA calculations. That compares with about 141 billion reais so far this year.

“Greater volatility should lead to a less active year, but I’m still constructive,” said Eduardo Mendez, head of equity sales and equity capital markets for Latin America at Morgan Stanley. “Several transactions are expected to take place, particularly in the first half of the year.”

Bankers are also counting on stronger mergers and acquisitions activity to offset some of the slowdown in IPOs in Brazil, according to Greenlees, who recently advised on shoemaker Arezzo’s acquisition of fashion brand Carol Bassi.