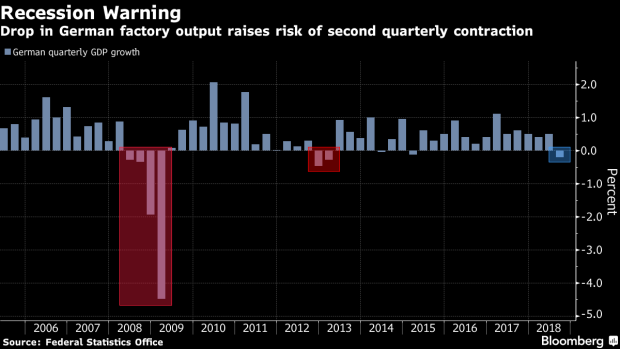 (Bloomberg) -- Mario Draghi will break his silence on Tuesday after sitting through a month of growing doubts over the durability of the region’s economic expansion.

The European Central Bank president will make his first appearance of 2019 -- and probably his final one before the Jan. 24 policy decision -- at the European Parliament in Strasbourg on Tuesday. He’ll speak within hours of finding out if Germany, the region’s biggest economy and supposed powerhouse, finished last year in recession.

That would be among the most troubling developments after a slew of weak data that has some questioning whether the ECB will ever be able to start raising interest rates. While the central bank managed to halt its bond-buying program last month without roiling markets, investors have essentially written off any chance of rate hike this year and are wondering what policy makers might do should the slowdown turn into something worse.

“It’s a critical point -- there is a slowdown in global growth and it could eventually spill over into the domestic economy,” said Nick Kounis, an economist at ABN Amro NV in Amsterdam. “Their assessment of the situation is too benign.”

Draghi and his colleagues acknowledged the murky outlook at their last meeting, when they cut their economic forecasts. At the same time, they’ve kept language that suggests they could still raise rates later this year.

At the Federal Reserve, Chair Jerome Powell has helped calmed markets by signaling that U.S. policy makers could pause rate hikes if needed.

Since the last ECB meeting, euro-area data have largely worsened, with confidence falling, activity in manufacturing and services dropping to the weakest since 2014, and industrial production slumping.

Germany will release growth figures for 2018 at 10 a.m. Frankfurt time, which will give a glimpse of the fourth quarter. After the economy shrank in the third quarter, another contraction would constitute a technical recession.

The nation should recover, as part of the slowdown is due to temporary issues in the car industry that are now fading, but other large economies are also hurting. France is slowing and Italy may have dipped into its third recession since the global financial crisis.

As the ECB president speaks, another European concern will be coming to the boil 650 kilometers (400 miles) to the north-west. The U.K. parliament will be preparing for its “meaningful vote” on Prime Minister Theresa May’s transition deal for Brexit. Indications so far are that she could lose, making Britain’s already messy plans for leaving the European Union even more uncertain.

That’ll put the spotlight on another powerful monetary chief. Bank of England Governor Mark Carney is due to testify to the U.K. parliament on Wednesday morning, on financial stability.

To contact the editors responsible for this story: Paul Gordon at pgordon6@bloomberg.net, Fergal O'Brien