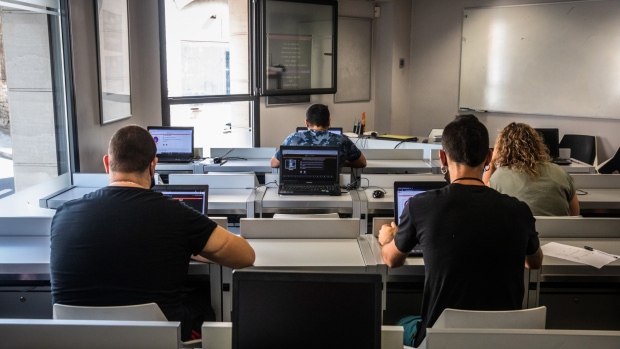 Attending driver’s education is a rite of passage for many, especially if new drivers want to be eligible for lower auto insurance rates.

However, the costs associated with driver’s education can be challenging for young people.

One new digital startup entering the space, Toronto-based Kruzee, is leveraging technology to try and keep prices reasonable, while also putting more power into the hands of its students.

“We noticed there was a huge gap in the market in terms of what students expect from any digital experience today and what was being offered in driver’s education,” said Mikael Castaldo, co-CEO of Kruzee, who launched the startup with Osama Siddique, who also holds the role of co-CEO.

“This ritual that students go through, it’s somewhat more than just learning how to drive. For teenagers, it’s about becoming an adult. And for those a little bit older, there’s a certain sense of freedom. But the experience of going through driver’s education is almost the antithesis of freedom where students have very little choice around who their instructor is and when they learn.”

At Kruzee, students will be able to choose their in-car driving instructor online, using information like their bio and reviews to find the best fit. Students will also be able to view their availability, book lessons online, and choose their pickup location, Castaldo said.

In other programs, students are getting into vehicles with people they don’t know anything about, Castaldo said.

“Even if the driving school overall has great reviews, if you don’t know more about the individual person that you’re getting in the car with, that might not map out.”

To get your probationary licence in Canada, which means you can finally drive unaccompanied, you typically need to have your learner’s licence for one year and pass a road test. Driving school can help speed up that process.

In Ontario, for example, students who participate in a Ministry of Transportation (MTO)-approved course, can get their probationary licence in eight months instead of the standard 12. They’ll also be eligible for lower insurance rates.

At Kruzee, their MTO-approved course includes 10 hours of in-car lessons with a driving instructor and a fully online course to fulfill the classroom instruction component of driver’s education. With the latter, there’s 20 hours of self-placed learning and 10 hours of Homelink, which, with digital education, is essentially online exercises that apply the knowledge learned.

The full program is priced at $695, a significantly lower price point than Young Drivers of Canada in Toronto, who offer a similar package with an online self-paced course for $1,299, in addition to an online live teacher package that goes for $1,399.

On their website, Young Drivers of Canada explains that they’re more expensive than competitors because of their specialty collision training, which is about teaching students to proactively spot problems when driving so they can better avoid them.

Since the big draw of driving school, outside of learning road safety, is the discounted insurance rates, students will need to ensure they’re participating in an accredited program.

“[New drivers] should check their region’s Ministry of Transportation website to ensure they sign up with an accredited school,” said Sonja Denobrega, Aviva Canada’s vice president of personal insurance and underwriting policy.

“Ministry-approved driving schools have established regulations to ensure that new drivers are taught about driving safety and attend a certain amount of both in-class and in-car lessons. This prepares drivers to be safer on the road and increases the likelihood that they will be able to react more quickly to better avoid collisions.”

As for if one program will get you a better insurance discount rate than another, a spokesperson from insurance company Belairdirect confirmed that customers will get the same driver’s training rate as long as their school is approved by the Ministry of Transportation.

Denobrega responded that “Aviva supports all programs approved by the Ministry of Transportation.”

In Aviva’s case, rather than a particular discount, the insurance company offers a better driving record to those who have completed an approved program.

“This essentially gives the driver "credit" for three years of driving experience, whereas drivers who did not take a driver’s education program will have one year of experience,” Denobrega said.

Typically, those under 25 who complete a driver’s education program are often eligible for a 10 to 20 per cent auto insurance discount, Castaldo said, but that depends what insurer you go with.

“Some insurers will reward driving school programs more heavily than others, so students have to do their own due diligence and actually compare auto insurance quotes,” he said.

While the initial launch is for the Greater Toronto Area, Castaldo said the plan is to expand across Canada in short order, with Quebec and Alberta next.