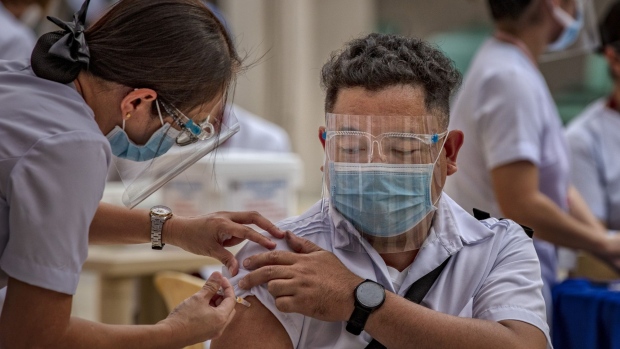 MANILA, PHILIPPINES - FEBRUARY 15: Health workers take part in a mock COVID-19 vaccination drill at the Philippine General Hospital on February 15, 2021 in Manila, Philippines. Pressure is mounting on the Philippine government to secure COVID-19 vaccine deals after the country's coronavirus task force chief Carlito Galvez, who also handles the government's vaccine procurement, admitted the country has yet to have a firm agreement with any vaccine manufacturer. The Philippines, which so far has confirmed more than half a million cases of COVID-19, is one of the few countries left in Southeast Asia who has yet to secure vaccines for its citizens. President Rodrigo Duterte faced controversy last month after admitting that his presidential security and a number of his ministers had already received vaccines for COVID-19, which the defense minister admits was "smuggled", but justified its use. (Photo by Ezra Acayan/Getty Images) , Photographer: Ezra Acayan/Getty Images AsiaPac

(Bloomberg) -- Philippines President Rodrigo Duterte would not place the whole nation under the loosest movement restrictions without the roll out of coronavirus vaccines, his spokesman Harry Roque said.

While reopening the economy is important, Duterte “gives higher premium to public health and safety,” Roque said in a statement Monday. The president wants the vaccination program to start soon to ease current mobility curbs, he said.

Read: Philippines Clears Sinovac Shots, But Not for Health Workers (1)

Metro Manila, the nation’s capital region that accounts for about a third of the economy, is currently placed under second loosest restrictions. The nation recorded its highest daily infections since November on Monday.