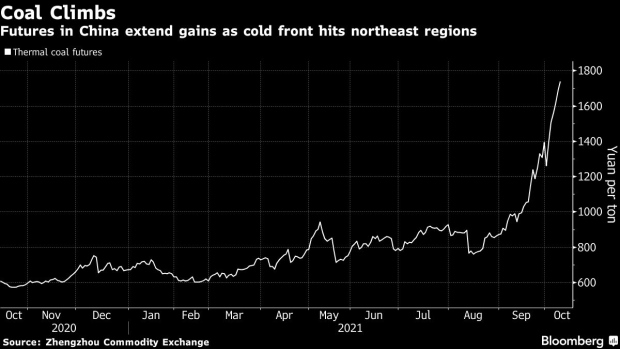 Technicians install new power lines in Wangting, Jiangsu province, China, on Thursday, Sept. 30, 2021. China's central government officials ordered the country's top state-owned energy companies -- from coal to electricity and oil -- to secure supplies for this winter at all costs, according to people familiar with the matter. Photographer: Qilai Shen/Bloomberg , Bloomberg

Temperatures have dropped more than 10 degrees Celsius (50 Fahrenheit) in recent days across most of eastern China, and snow has begun to fall in parts of Inner Mongolia and Heilongjiang, according to the China Meteorological Administration. The agency initiated a level four emergency response on Friday because of the cold wave.

China thermal coal futures extended a stratospheric rally in Monday trading as some provinces signaled they’ll bring forward the start of the traditional heating season, when local government-controlled systems -- typically powered by coal or gas -- are fired up to warm residents’ homes through the winter months.

Jilin, a northeast province that suffered blackouts last month amid low coal supplies, began winter heating operations on Oct. 15, earlier than usual, with coal inventories at about 85% of capacity, according to local reports.

Thermal coal futures on the Zhengzhou Commodity Exchange rose as much as 8% to 1,828 yuan a ton ($284) Monday, the highest intraday price on record.

China has been pushing coal miners to boost output and expects to continue curtailing power supplies to large, energy-intensive users through the winter to make sure supplies can meet winter heating demands.

Leaders are also speeding up market reforms, allowing electricity prices to rise higher to incentivize power plants to keep generating despite lofty coal prices. Rates have risen by the maximum of 20% in provinces including Jiangsu and Shandong since the reforms went into effect on Friday, Securities Daily reported.