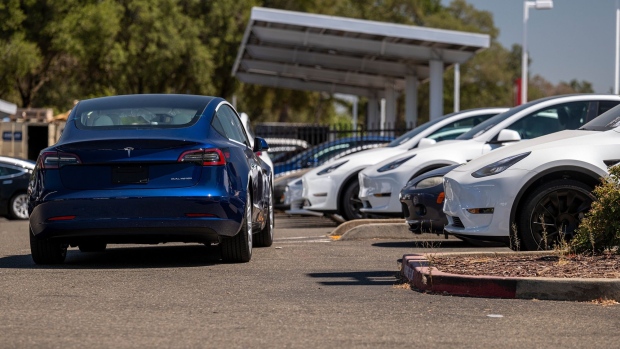 Just $10.6 billion of high-grade bonds priced this week, making it the second slowest of the year, according to data compiled by Bloomberg. Among the expected line up for next week’s business is financial issuance from regional banks, along with more from corporates after they report.

Credit investors took a volatile start to the week in stride with spreads recovering, and Barclays Plc strategists expect the market to remain resilient.

But with valuations high in both investment-grade and high-yield, “finding opportunities remains challenging,” Rogoff added.

Bank of Nova Scotia will hold investors calls Monday for a sustainability bond.

Bank of America Corp. strategists saw this week’s U.S. junk-bond selloff as an opportunity to buy the debt.

“Recent volatility has improved the risk-reward profile in HY going forward,” BofA analysts led by Oleg Melentyev wrote in a note Friday. The bank boosted its total-return forecast over the next 12 months to 3% to 6% from a prior view of 2% to 4.5%.

The junk-bond pipeline is light heading into the week with just one known deal set to price. Allen Media LLC is selling $340 million of additional 10.5% bonds that are slated to price July 27.

California Pizza Kitchen Inc. is looking to refinance debt from its bankruptcy exit as its owners mull a possible sale or initial public offering of the restaurant chain, according to people with knowledge of the matter. The exact timing of the refinancing has not been decided, but it could be launched in the coming weeks, the people said. The deal will target the $177 million of debt left on the company’s balance sheet after it emerged from bankruptcy last November.

In distressed debt, secured debtholders to Endo International Plc have hired Evercore Inc. as financial adviser as the drugmaker faces potential damages stemming from opioid-related litigation, according to people familiar with the situation.

Distressed issuer Peabody Energy Corp. is scheduled to report its second-quarter results before the market opens on Thursday, July 29, and AMC Entertainment Holdings Inc. has its annual shareholder meeting the same day.