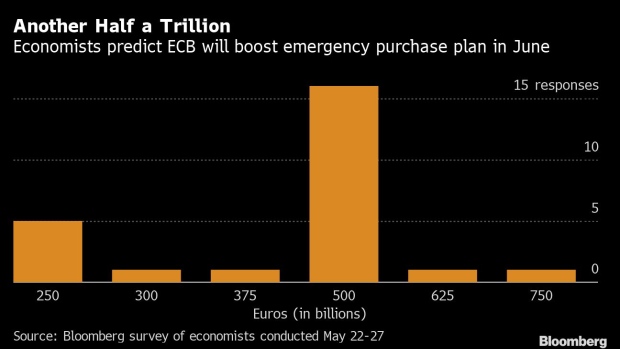 (Bloomberg) -- The European Central Bank will step up emergency asset purchases next week to haul the economy out of its much deeper than originally anticipated slump, according to a Bloomberg survey of economists.

Almost three in four respondents said the ECB’s pandemic program will be increased on Thursday, when the Governing Council holds its next scheduled meeting. The majority expects a top-up of 500 billion euros ($550 billion) that would take purchases under all plans this year to 1.6 trillion euros.

The increase will reinforce the ECB’s key role in rebuilding the 19-nation economy and shrug off concerns that a controversial German court ruling will constrain policy makers’ scope for action. It will also keep a lid on borrowing costs while European governments work out the details of an ambitious joint fiscal plan.

Updated economic projections may confirm the latest grim assessment by ECB President Christine Lagarde, who said Wednesday the economy will shrink between 8% and 12% in 2020, in line with the institution’s more severe scenarios.

“They’ll crystallize the grim reality for the euro zone,” said Claus Vistesen, chief euro-area economist at Pantheon Macroeconomics. “The ECB will use that to further lift its asset purchases, and commit to an extension beyond December 2020.”

Most respondents expect the program to be extended beyond the end of the year, and all said the central bank will reinvest proceeds from maturing assets to prevent financial conditions from tightening.

Since its start in late March, central banks have bought debt at an average weekly rate of 26 billion euros for a total of 212 billion.

“The fact that the PEPP will be exhausted by October, at least at its current pace, could quickly lead to unwarranted speculation in financial markets,” said Carsten Brzeski, an economist at ING in Frankfurt. “Preemptively denting such speculation would argue for a June decision.”

The responses underscore how the new bond-buying plan has emerged as the ECB’s main policy tool to support the economy. The vast majority expects the key interest rate -- currently at minus 0.5% -- to be kept on hold at least through the end of next year. Asset purchases in the central bank’s older program are forecast to remain at the current pace of 20 billion euros per month.

The survey was conducted before this week’s proposal by the European Commission of a 750 billion-euro rescue package to help struggling nations cope with the pandemic, but after the leaders of France and Germany presented a joint plan to have the bloc issue 500 billion euros in grants to its members. An historic step toward more political integration, respondents were split on what exactly such a deal would mean for the ECB.

“The latest proposals for burden sharing from France and Germany as well as the European Commission seem unlikely to significantly affect next week’s discussion in Frankfurt about the amount needed to combat the crisis -- the final outcome of those EU negotiations is far from clear and the financial resources may not be available for a long time.”

Policy makers have repeatedly said they’re ready to adjust their tools and pointed to the flexibility of its newest purchase program in channeling support to those members that need it most.

“The ECB will strike its usual ‘readiness to do more’-tone,” said Piet Christiansen, chief strategist at Danske Bank in Copenhagen. “Should further stimulus come, we expect this to be via further purchases and potentially also new asset classes in the PEPP. The ‘conventional’ rate path is not the preferred option.”

Economists expect banks to borrow some 800 billion euros in the second quarter in the ECB’s various lending programs. The vast majority sees this happening through programs offering extremely favorable conditions in exchange for continued credit supply, suggesting limited take-up in the new operations the central bank announced at its last meeting.