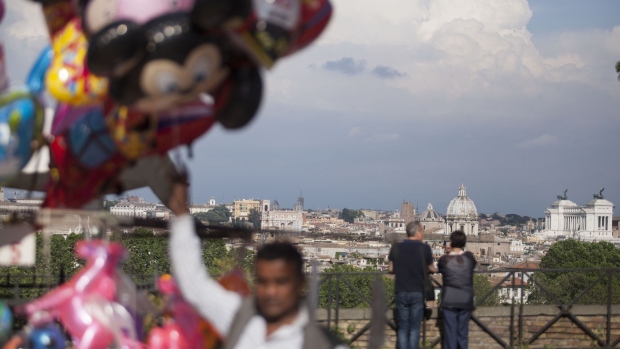 Visitors look across the skyline as a balloon seller passes by in Rome, Italy, on Friday, May 11, 2018. An Italian populist government is likely to water down plans for greater spending and any anti-euro rhetoric, a flip for investors in the nation’s assets, market analysts say. , Bloomberg

“In some countries the increase in prices has generated angst,” Panetta said at an event in Florence, Italy. “The central bank is not intervening because if it did, it would create more damage than benefit. It’s like an illness, not all medicines are good for all illnesses.”

The comments were similar to ones Panetta made Wednesday in Paris, when he said Europe was undergoing supply shocks and divided inflation into the good, bad and ugly categories.

Current inflation is “bad,” but also temporary -- driven by supply chain snags and energy price increases, which “are bound to be overcome,” Panetta said.

He added that if inflation looked like becoming more permanent, he would be among the first in favor of ECB intervention.

Separately, asked whether the ECB should follow the Fed in its monetary policy moves, Panetta said Europe’s central bank is in a position to be independent.

“Clearly we need to keep track of global monetary conditions. If raw material prices increase that affects everyone, but an increase in rates in the U.S. doesn’t condition us” to follow, he said.