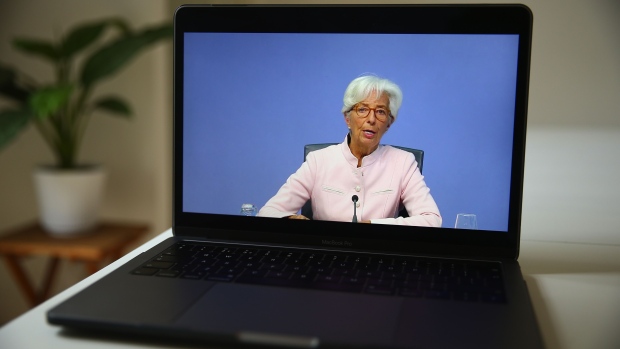 (Bloomberg) -- European Central Bank policy makers didn’t agree on whether they expect to use the full amount of their 1.35 trillion-euro ($1.5 trillion) pandemic emergency purchase program when they met Thursday, despite President Christine Lagarde subsequently saying that’s likely, according to people familiar with the discussions.

Lagarde’s remarks in a press conference after the policy meeting contrasted with recent signals from colleagues including Executive Board members Isabel Schnabel and Yves Mersch that the improving economy may mean bond-buying could end before reaching the current cap.

While the Governing Council has to sign off on the wording of the president’s introductory statement, it’s within her remit to expand on the official communication when fielding questions from journalists.

“Unless there were significant upside surprises, our baseline remains that we will use the entire envelope of PEPP.”

The mixed signals reflect differing levels of confidence about the strength and sustainability of the rebound from the coronavirus crisis as lockdowns end. Countries such as Germany have so far fared better than some Mediterranean ones.

The ECB’s baseline projection is for an 8.7% contraction in the euro-area economy this year. Signaling that emergency purchases would fall short of the announced amount would have indicated a more optimistic outlook -- a message the ECB is not yet prepared to send.

At least one policy maker thinks it’s likely that the pandemic program will have to be increased again, according to one person familiar with the discussions. Economists predict a top-up of 500 billion euros by the end of the year.

Several Governing Council members asked to include a line in Lagarde’s introductory statement expressing confidence that the most-recent forecast is realistic, the people said, asking not to be identified because the meeting was private.

Policy makers decided against such a declaration in the end because of the dire economic situation in Italy, the region’s third-largest economy, according to the people. An ECB spokesman declined to comment.

Lagarde herself labeled the recent rebound “significant,” while also stressing that the region’s recovery remains partial and uneven, with risks still tilted to the downside.

The issue of the size of bond purchases is crucial to investors, particularly those concerned about the stability of more vulnerable economies such as Italy and Spain.

(Updates with expectations for more bond purchases in sixth paragraph.)