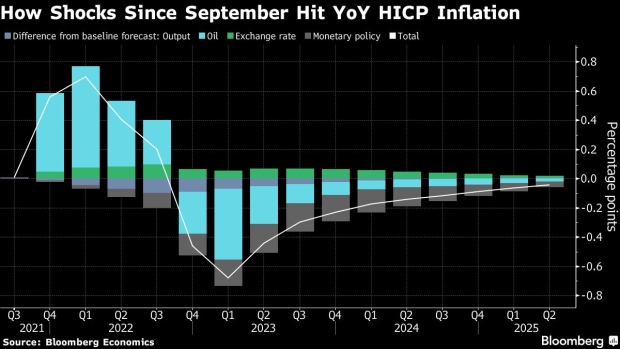 The European Central Bank (ECB) headquarters beside the River Main in Frankfurt, Germany, on Monday, Oct 25, 2021. The European Central Bank insists the current price spike will ease, though officials' most up-to-date view will be revealed at the rate decision, along with their assessment of an economy whose snapback from the pandemic is going awry. Photographer: Alex Kraus/Bloomberg , Bloomberg

European Central Bank officials meeting next month will receive new forecasts that are likely to show inflation peaking at a higher rate than expected earlier, before settling at a lower level.

That’s the assessment of Bloomberg Economics, which has used its SHOK model to gauge what’s changed since the last round of ECB projections in September. The calculations adjust for higher energy costs, a weaker trade-weighted exchange rate and softer domestic demand.

Consumer-price growth in the euro area is set to reach a high of 4.4% this quarter, according to economists Jamie Rush and Maeva Cousin. But their model shows rates will go as low as 0.8% in the first quarter of 2023, before ending the year at 1.4%, which falls short of what the ECB had previously envisaged.

“Our analysis underscores the challenge facing President Christine Lagarde and her colleagues on the Governing Council,” the economists said. “The sources of high headline inflation are likely to leave the economy weaker and price gains 0.2 percentage points slower in the medium term.”

Indeed, policy makers find themselves facing a weaker outlook for inflation in the years ahead, even as the clamor for action to counter the current bout of soaring prices grows. In addition, fear over the dangers still posed by the pandemic is on the rise following the return of lockdowns to some parts of Europe and the discovery of a new variant in Africa.

ECB officials, who are due to announce their next decision on Dec. 16, have recently struck a more hawkish note, with Executive Board member Isabel Schnabel telling Bloomberg last week that inflation risks are “skewed to the upside” and the Bundesbank warning prices in Germany may have jumped by almost 6% in November.

But on stimulus, there appears to be an emerging consensus for flexibility to be retained even as net purchases under the ECB’s pandemic bond-buying plan are wound down as planned in March.

The central bank’s new projections may also indicate to investors that the conditions needed for benchmark borrowing costs to be raised will likely not be met any time soon.

“Pushing down the medium-term inflation forecast would send another useful signal that markets have got ahead of themselves on interest rates, even if it’s not the full 0.2 percentage point by SHOK,” Rush and Cousin said.