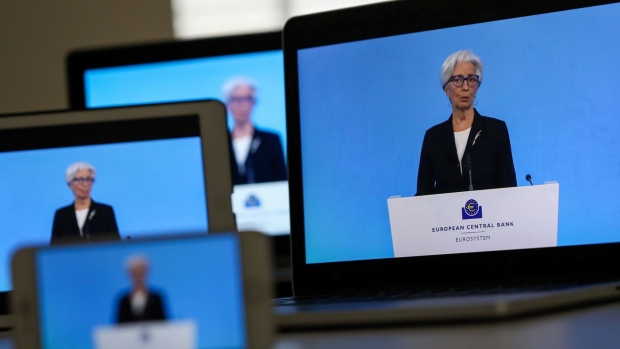 “An ambitious and coordinated fiscal stance remains crucial, as a premature withdrawal of fiscal support would risk delaying the recovery and amplifying the longer-term scarring effects,” she told a meeting of the International Monetary and Financial Committee on Thursday.

She added the ECB’s own measures “can be recalibrated if required to maintain favorable financing conditions.”

The ECB has unleashed a barrage of support over the past year to help the euro-area economy fight the fallout from the coronavirus pandemic. It recently pledged to ramp up bond-buying under its 1.85-trillion-euro ($2.2 trillion) emergency program after yields rose and policy makers warned that the region may not be ready to absorb higher borrowing costs.

The International Monetary Fund -- which holds its spring meetings this week -- has warned about widening inequality and a divergence between economies’ recovery speeds. While it upgraded its 2021 growth forecast for the euro area to 4.4% from 4.2%, prospects elsewhere are brightening more rapidly.

The U.S. economy is set to be turbo-charged by a US$1.9 trillion economic relief package, while the euro area’s joint recovery fund hasn’t even been signed off on in all member states. French Finance Minister Bruno Le Maire said in a Bloomberg interview on Wednesday that he’s “deeply concerned” at the slow implementation of the 750 billion-euro plan.

With progress on vaccination also lagging behind, Lagarde said “national fiscal policies should thus continue to provide critical and timely support to firms and households most exposed to the pandemic and the associated containment measures.”

Several of her colleagues have argued that national and joint efforts in Europe will provide significant support, even if they are smaller in size than in other parts of the world.

“These numbers will unlikely match the numbers in the U.S., but I do think the efficiency of the spending in Europe is a bit higher,” Dutch Governing Council member Klaas Knot said in a CNBC interview on Thursday. “At this moment I do think that the response is appropriate but if the response needs to be stepped up then I do think there is a willingness and preparedness on the side of fiscal authorities to step up.”