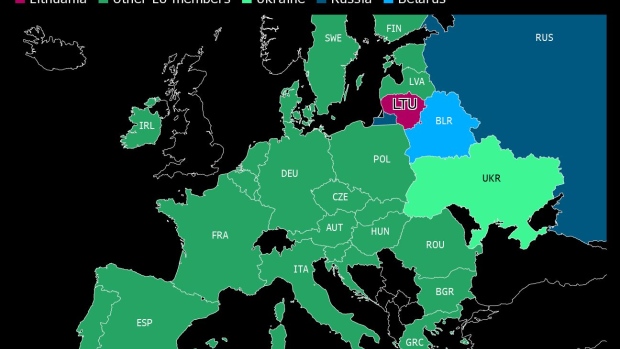 The European Union is debating what sanctions it could impose on Russia if it attacks Ukraine, and while any punitive measures would be aimed at the Kremlin, the results would trigger economic harm for the region, Simkus said. That puts pressure on diplomats to defuse the threat of conflict.

“The situation adds uncertainty; if it escalates, it will obviously have an impact on our economies, on the Lithuanian economy, on the euro-area economy,” Simkus -- also a member of the European Central Bank Governing Council -- said in an interview. “We, Europe and the others need to find, a decision leading to de-escalation, as further escalation means huge loss, and not only in terms of economic wealth but also losses in terms of lives.”

Lithuania has a unique vantage point of the crisis. The Baltic nation, a former Soviet republic, is part of the EU, but shares a border with Russia and Belarus -- the two allies, which both border Ukraine, are planning joint military drills next month.

Russia has massed more than 100,000 troops near Ukraine’s eastern border and the U.S., which put as many as 8,500 troops on alert, say it could be preparing for military action. Moscow has denied it intends to invade, but the threat has spurred efforts by the U.S. and its European allies to show a united front.

Simkus’s home country is at the center of another geopolitical dispute. Tensions with China have been escalating since Taiwan opened a representative office in Lithuania’s capital in November -- a move seen as an affront by Beijing, which considers the island part of its territory.

“We’re dealing with something that we call undeclared sanctions” and need help from European partners to respond, Simkus said. “It’s of crucial importance to have a single and uniform answer to this threat that Lithuania has experienced.”