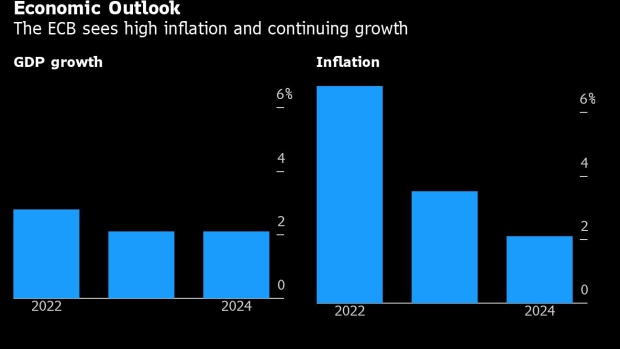 (Bloomberg) -- The European Central Bank should stick with its plan of starting off tightening with only a quarter-point interest-rate hike, said Madis Muller, the policy maker whose economy has the region’s fastest inflation.

In contrast to calls by colleagues from other Baltic countries to at least consider a half-point increase for the first move, the Estonian governor said officials should wait until September to raise by that amount.

“Given the inflation outlook, it’s appropriate to start raising interest rates in July” by a quarter point, Muller said in an interview in Dubrovnik, Croatia, on Sunday. “We should continue with a further hike of 50 basis points in September.”

Muller’s suggested rate path is in line with most other ECB officials’ views, though his two Baltic colleagues have said last week that a bigger increase should at least be an option for the July 21 decision.

Estonia has the highest inflation of any euro-area country. It hit 22% last month, with Lithuania at 20.5% and Latvia at 19% not far behind.

All three are at more than double the 8.6% reading for the region as a whole, which already far exceeds the ECB’s 2% target.

Estonia, which joined the euro more than a decade ago, will probably see average inflation above 15% for the year -- again much higher than elsewhere in the currency union, said Muller, who is often considered one of the Governing Council more hawkish members.

“This is primarily driven by energy prices, the increases of which in the global markets are in our case very quickly passed on to consumers,” he said of his country’s data. “But we are also seeing high inflation in food prices and strong domestic demand.”

The combination of weak growth and fast inflation has raised the specter of stagflation in the euro area, a premise rejected by Muller.

“For the euro-area economy, stagflation isn’t the most likely scenario,” he said. “The outlook of growth has weakened in recent months, but we can still expect some positive economic growth in the euro area for the coming years, with questions around gas supply a significant risk.”

The ECB’s most recent economic forecasts see growth staying above 2% through 2024. Inflation is seen at more than triple the central bank’s goal this year, close to double in 2023 and converging toward the target the following year.

Muller said Estonia’s economic outlook is “similar” to that of the rest of the region, where growth has been hampered by the fallout from Russia’s war in Ukraine.

“Just as for other European countries, the economic outlook is affected by the high level of uncertainty facing businesses due to supply chain problems and high inflation,” he said. “The need to reconfigure supply chains of energy and other commodities is putting additional pressure on the European economies. This is costly in terms of additional investments and is having a direct impact on prices.”