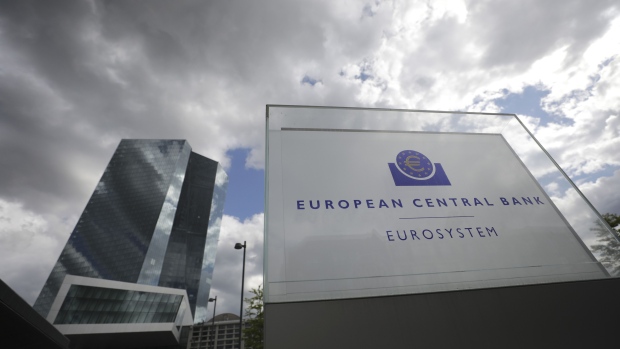 A Eurosystem monetary authority sign stands on display outside the European Central Bank (ECB) headquarters stands in Frankfurt, Germany, on Wednesday, April 29, 2020. The ECB’s response to the coronavirus has calmed markets while setting it on a path that could test its commitment to the mission to keep prices stable. , Bloomberg

As the European Central Bank waits for the spike in euro-area inflation to moderate, its staff is proving less patient.

The institution’s trade union -- known as the International and European Public Services Organisation, or IPSO -- is demanding that this year’s general salary adjustments for staff be topped up. The ECB’s proposed raise of 1.3% “no longer protects our salaries against inflation,” IPSO wrote last week in an email to employees that was obtained by Bloomberg.

While the ECB targets medium-term inflation of 2%, prices in Germany -- where the ECB is based and many of its staff live -- are likely to surge close to 6% this month, the Bundesbank warned this week. IPSO argued that the discrepancy between suggested pay raises and the cost of living will result in a “permanent loss in purchasing power” for staff.

“Even if the rise in inflation could be of a temporary nature -- which we all hope -- we have no guarantee to recoup our losses,” the email stated. “The ECB is not able (or willing?) to protect its own staff against the impact of inflation!”

ECB employees currently rely on a salary-adjustment methodology based on wage developments at national central banks and other European institutions, rather than linked to the location where they’re based.

That system is used “because it allows to maintain a close link with the salary developments of the national central banks of the member states, particularly those within the euro area,” an ECB spokesperson said.

IPSO, whose demands were first reported Tuesday evening by Politico, is arguing in favor of an indexation mechanism -- linking wage gains to inflation in either Germany or the euro area -- to eliminate possible tensions.

Such an approach could be viewed as troubling by policy makers, who fear wages across the region’s economies may rise too rapidly and cause higher prices to become more persistent. At a European Parliament hearing last week, ECB President Christine Lagarde called the transition away from indexation systems since the 1970s “an improvement.”

But that shift, combined with trade unions’ reduced bargaining power, is also likely to have contributed to subdued wage and price developments over the past decade, during which the ECB embarked on unprecedented stimulus to ward off deflation risks.

“We don’t create inflation or a wage-price spiral if we align ECB staff salary with inflation,” Carlos Bowles, vice president of IPSO and an economist at the ECB, said when asked about the demands. “If the ECB has any role to play in inflation, it is via its monetary policy, not via the mechanism used to adjust the salary of its staff.”