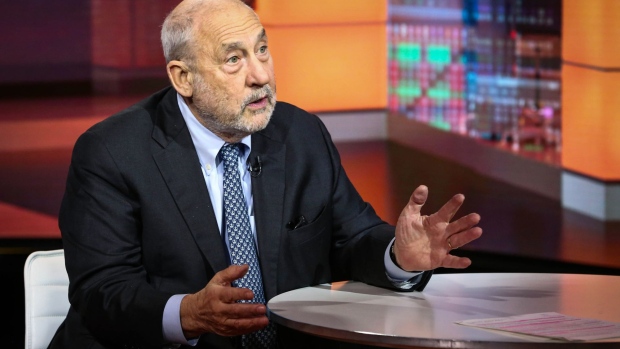 (Bloomberg) -- Four prominent economists are imploring the White House to rethink a critical lever for policymaking that they call “insufficient to deliver the climate targets set in the Paris Agreement and by the Biden administration.” The tool in question, called the social cost of carbon, is an estimate in dollars of how much damage every metric ton of greenhouse gas pollution inflicts. By using traditional methods, the economists say President Joe Biden is potentially endangering his own climate goals.

In a new note released today by the Roosevelt Institute, an economics and social policy think tank, economists argue that the administration’s initial estimate released last year—$62 per metric ton of CO₂ by 2030—is way too low. Joseph Stiglitz, a Columbia University economist and 2001 Nobel laureate; Lord Nicholas Stern, chair of the London School of Economics’ Grantham Research Institute; and two colleagues criticize the White House for using dated, subpar methods to estimate the social cost of carbon.

In an interview, Stiglitz says unless it is raised, the social cost of carbon won’t provide markets with a signal commensurate to the scale of the problem. “The question is, where do we set the dial?” Stiglitz told Bloomberg Green. “If we set the dial too low, it just won't do anything.” The interview has been condensed and edited.

Should anybody care about technocratic dials and levers when, as the historians warn us, democracy is under assault?

Halfway. Obviously, if democracy is at risk—and if it goes under—the particular group that would take control would be antithetical to everything that that we're concerned with. Maintaining a democracy is the number one issue. I don't think anybody would deny that. But you also can't deny that saving the planet is a pretty existential issue.

How long has that been the case?

I was on the IPCC [UN Intergovernmental Panel on Climate Change] 30 years ago. We thought things were bad. We were extraordinarily cautious, but things have moved faster. This also is of the first order. And, to a majority of young people, it's first-order. Many of the younger people have lost confidence in democracy. If democracy fails, we still need to deal with climate change.

So the social cost of carbon even matters when people can’t find at-home Covid tests?

In a market economy, prices are critical to resource allocation, to guide investment, to guide regulation. You have to have some notion of the benefits of reducing carbon (or the cost of not reducing carbon, either way). So, to me, once you start viewing climate change as an existential issue, it has to be addressed. I agree it's a little wonkish, but not for anyone who thinks of themselves as understanding a market economy. The real point of the paper is broader than the social cost of carbon.

It’s about… pumping information into the market?

If the Federal Reserve looks at climate risk, we will do a better job. It would be derelict of central bankers and regulators not to take it into account, as they do stress tests to assess the riskiness of the bank's portfolio. We had a financial crisis when we repriced subprime mortgages, which represent a small fraction of the mortgage market—which represents a fraction of our total financial system. But if you think about the fraction of assets that are touched by our energy system, by real estate that is in places that are being confronted with climate change, we're talking about a much larger fraction of our financial system, with potentially dramatic changes in prices.

You won the Nobel prize for work on “information asymmetry.” How does that research relate to climate change?

In general, financial markets don't know who is a good credit risk and who is a bad credit risk. A low-cost way of reducing carbon is creating access to finance for people to buy solar heaters or retrofit the energy system.

“Coordination Failure”: Is that what economists call a chicken and egg problem?

Yeah. You can't develop batteries before you have cars. You can't have cars without the batteries. Tesla tried to solve that coordination problem by becoming a major producer of batteries.

There’s also what you might call an asymmetry of information between nature and ourselves. Nature may know where this is all going, but we don't. And then the question is, how do we behave in the context of that deep uncertainty?