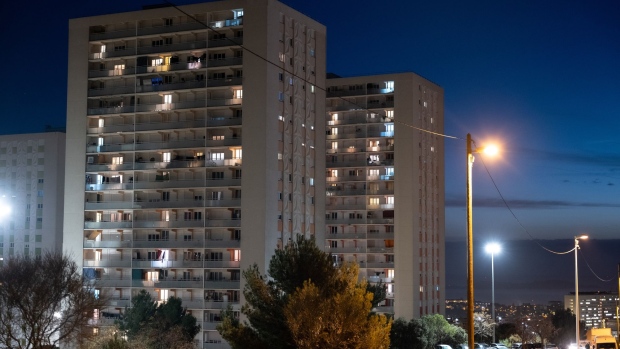 Lights on inside homes within apartment blocks in the Northern districts of Marseille, France, on Thursday, Nov. 24, 2022. The French governments 9.7 billion ($10 billion) offer to buy out minority shareholders of Electricite de France SA (EDF) will take the nationalization of the debt-laden nuclear giant a step closer. , Bloomberg

(Bloomberg) -- Electricite de France SA may need to buy back power on the European market Monday, citing an “operational incident” that caused it to sell too much electricity.

The company’s trading unit sold “on average an excess of 1.5 gigawatt-hours on the hours ending 1 to 24” on the Epex Spot market as a result of the incident, EDF said on its website, without elaborating further.

“As a consequence, actions might be initiated by EDF Trading to rebalance its intraday position for the delivery day,” it said.

The glitch could cost the company at least €1.5-2 million, according to Jean-Paul Harreman, a director at consultancy EnAppSys. It mirrors a mistake that cost one of EDF’s units €60 million ($63 million) in September. It’s also creating additional tensions on Europe’s electricity markets, which are already under strain because of EDF’s slumping nuclear output.

The nuclear power shortfall is exacerbating Europe’s energy crisis caused by dwindling Russian gas deliveries, and putting a huge hole in the finances of the atomic giant.

Maxed-out imports to France mean the country needs to ramp up generation from units such as oil-fired stations to meet the unexpected demand from EDF, Harreman said.

A spokesman for EDF couldn’t immediately comment on the trading unit’s incident.

The French government is currently offering to buy out minority shareholders of the debt-laden utility and help it invest tens of billions of euros in new atomic plants as France works to reduce its reliance on imported fossil fuels.

--With assistance from David Stringer.

(Updates with background in fourth paragraph)