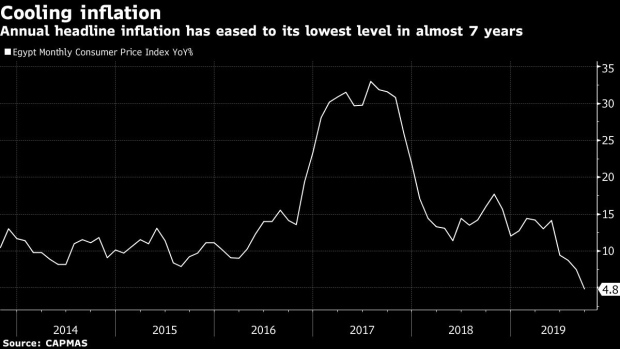 (Bloomberg) -- Egypt’s annual inflation rate in urban parts of the country slowed to its lowest in almost seven years, offering a fresh incentive to investors in local debt looking to maximize returns that are already among the highest in the world.

The headline inflation rate slowed to 4.8% in September compared to 7.5% the previous month, and remained unchanged on a month-on-month basis, according to state-run statistics agency CAPMAS. The drop marked the fourth consecutive month of easing that’s been largely linked to last year’s favorable base effect.

The deceleration was larger than that predicted by some analysts, most as a result of a sharp slowdown in the rise of food prices, which eased to 0.3% in September and fell 1.8% compared to August.

The fall in food prices was likely due to seasonal effects, said Mohamed Abu Basha, head of research at Cairo-based investment bank EFG Hermes. He had predicted an annual inflation rate of 5.3% in September. “We’re expecting a continued slowdown in inflation over the next couple of months, before ending the year between 8%-9%, due to the base effect.”

Interest-rate hikes enacted to curb inflation have left Egypt with one of the world’s highest real rates, c around 5.7%, and made its debt a favorite for foreign investors chasing yields.

To contact the reporter on this story: Mirette Magdy in Cairo at mmagdy1@bloomberg.net

To contact the editors responsible for this story: Alaa Shahine at asalha@bloomberg.net, Tarek El-Tablawy, Michael Gunn