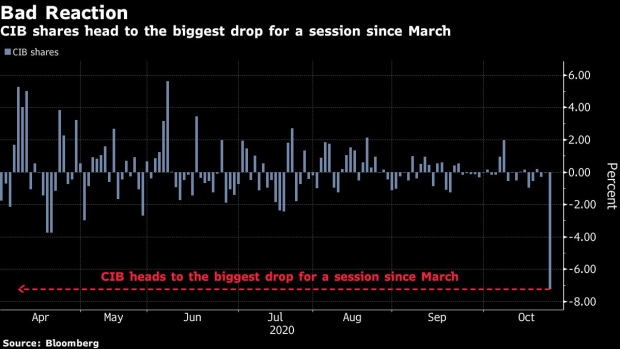 (Bloomberg) -- Commercial International Bank SAE slumped in Cairo after its chairman stepped down amid concerns over governance.

Hisham Ezz Al Arab resigned after an emergency meeting of the board convened to discuss a letter from the central bank communicating the regulator’s decision to dismiss him, CIB said in a statement on Friday. The bank said it took the central bank’s findings “very seriously,” and will investigate the issues raised. The bank didn’t elaborate on the content of the letter, and CIB officials said they had yet to see the audit in question.

“Investors, from now, will look forward to the complete audit report, which is still pending from the Central Bank of Egypt,” Aarthi Chandrasekaran, a money manager at Shuaa Capital in Dubai, said in an interview to Bloomberg TV. “Until then, I think they will be very skeptical to to take any new position.”

“I don’t expect this event to actually blow out of proportion,” Chandrasekaran said. “But the way the news came out -- the way it was handled the first two days -- was a disappointment to the investor community.”

CIB’s depository receipts on the London Stock Exchange rose as much as 15% after the announcement, rebounding from a 42% loss earlier on Friday and after a 17% slump the previous session. Shares in Cairo were suspended from trading on Thursday.

“Management ensured that there are no financial crimes, no fraud and believes, had there been huge financial losses or fraud, it wouldn’t have stopped” at Ezz Al Arab’s removal, Dalia Bonna, an analyst at Pharos Securities Brokerage, wrote in a report. Rather, “the CEO, board, and the management team would’ve been gone as well.”