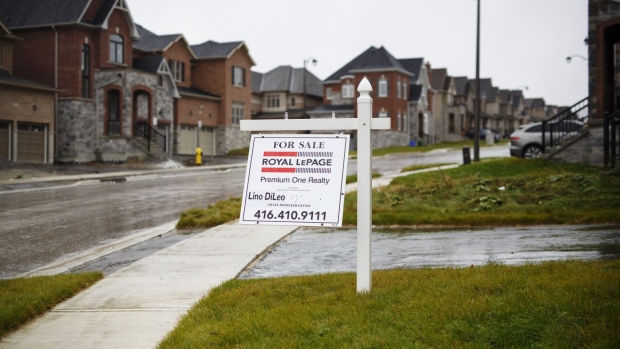 A "For Sale" sign stands in front of homes in East Gwillimbury, Ontario, Nov. 2, 2018. Bloomberg

Even with consistent economic conditions and no new housing policy changes, home prices will rise by 1.5% in the fourth quarter to an aggregate C$632,226 ($474,252) over the same period last year, according to a report Thursday by Royal LePage.

“Well-intentioned election promises aimed at making housing more accessible and affordable to first-time buyers will fall flat if they trigger a surge in demand without a corresponding increase in the supply of homes,” Phil Soper, president and chief executive officer of Royal LePage, said in a statement. Royal LePage is owned by Brookfield Asset Management Inc.

Housing affordability has become a key issue in the federal election campaign. Prime Minister Justin Trudeau is pledging to boost the cap on homes eligible for a 10% government-equity stake to almost C$800,000 in costly markets like Vancouver and Toronto while the Conservatives plan to review the mortgage stress test for first-time buyers, remove it from mortgage renewals and extend mortgage amortizations.

Prices resumed their upward track even after governments instituted regulations to tame the market, thanks to an influx of immigrants, a lack of supply and lower interest rates. Most markets have rebounded following an adjustment period last year, with Toronto seeing increased sales and a rebound to near-record prices.

In Toronto, the aggregate price of a home will rise by 3.1% in the fourth quarter to C$859,301, and condos, once the most affordable option, have surpassed C$600,000 and are poised to gain more, according to Royal LePage. While the Vancouver region continues to adjust to a policy-driven sales and price slump, the rate of price decline has slowed and Royal LePage expects it will slow further as buyers see cheaper prices as an opportunity to get into the market.

To contact the reporter on this story: Natalie Wong in Toronto at nwong133@bloomberg.net