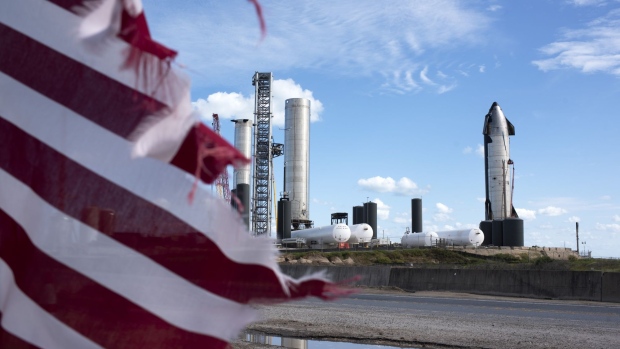 The Space Exploration Technologies Corp. (SpaceX) Starbase launch facility under construction in Boca Chica, Texas, U.S., on Sunday, Oct. 17, 2021. From a sprawling factory outside Austin to a property-buying binge on the Gulf Coast, Elon Musk is making an imprint in a state that has long welcomed eccentric outsiders. , Bloomberg

The main news Elon Musk generated early this week was that he’s not a fan of President Joe Biden’s Build Back Better bill. But his speaking out in opposition to a proposal that would subsidize electric-vehicle purchases was only one of the ways he signaled how much Tesla has matured as a company.

During a remote appearance at the Wall Street Journal’s CEO Conference, Musk talked about the level of attention he’s paying nowadays to the second-biggest company he leads, SpaceX. His description of how arduous a task it’s been to develop Starship — the next-generation vehicle the company plans to use to take humans to the Moon and Mars — sounded a lot like Tesla’s early difficulties with the Model 3.

Starship “absorbs more of my mental energy than probably any other single thing,” Musk said Monday. “It is so preposterously difficult, there are times where I wonder whether we can actually do this.”

For years, conventional wisdom among Musk watchers was that Tesla was on the brink of disaster and collapse, while SpaceX — the company that he founded in 2002 — was its smaller, more stable sibling. This was particularly true in 2018, when Tesla struggled to ramp up output of the Model 3 and suffered a wave of executive departures. The disarray peaked when Musk tweeted he was considering taking the company private, which got him sued by the U.S. Securities and Exchange Commission.

But behind the scenes, Tesla began turning things around. It finished that year with record deliveries and carried that momentum all through 2019. Last year, it launched the Model Y, opened its plant in Shanghai and made its way onto the S&P 500 Index. Musk wasn’t on the most recent earnings call, a first since Tesla went public in 2010. As the year comes to a close, Tesla is valued at over $1 trillion.

Musk’s arguments against Build Back Better were that U.S. spending is out of control and the federal deficit is unsustainable. He also noted none of Tesla’s sales this year or last year were eligible for tax credits. The company no longer needs subsidies, Musk said, and he called support for EV charging stations unnecessary.

Before he was talking up Tesla’s ability to stand on its own two feet, Musk signaled it’s now SpaceX that suddenly looks like the company on shakier ground.

Around Thanksgiving, Space Explored was first to report an email Musk sent to staff in which he warned the company faced “genuine risk of bankruptcy” if it’s unable to progress quickly enough with the Starship program. He told SpaceX troops that he was pulling out all the stops to resolve engine production issues, saying he would “be on the Raptor line all night and through the weekend.”

Musk famously shared years ago that he slept on the floor at Tesla’s factory when the company was on the brink of failure. It appears Raptors and Starships are the new Model 3.