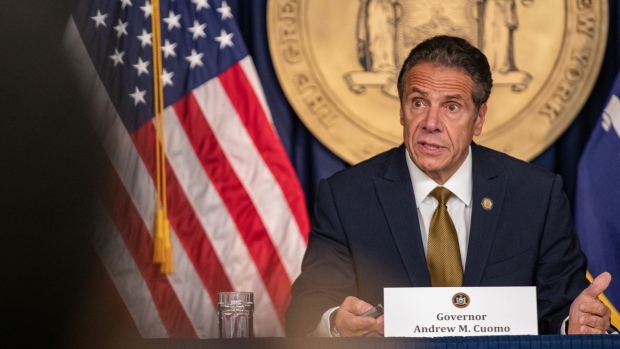 The Tuesday deal was a notable hold up for the budget, which is normally due ahead of the start of the state’s fiscal year on April 1. The embattled governor is facing multiple investigations into sexual harassment claims, a federal probe over his handling of coronavirus deaths in nursing homes, and calls to resign by dozens of members of his own party who say his scandals have become a distraction in Albany. He’s also contending with a super-majority in both houses, where the progressive arm of his party has been emboldened by his foibles.

Cuomo, a Democrat, has long prized on-time budgets as a sign of a functioning government, a change from previous governors that let negotiations languish into the summer. He even tied lawmakers salaries to the budget’s passing, calling the inability to pass an on-time spending plan in 2016 “a failure of performance.”

Cuomo has made the April 1 deadline in all but three instances during his 11-year tenure, including the 2020 and 2021 pandemic years and 2017, when measures relating to real estate tax breaks and minors in the criminal justice system held up a deal.

This time around, the budget negotiations revealed a weakened hand for a three-term governor who typically wields an inordinate amount of power and uses the spending document as a mechanism to push through signature policies.

The negotiations are a sign of an “emboldened” legislature that doesn’t want to let the “governor get his way like he used to,” said Doug Muzzio, a political science professor at Baruch College.

Cuomo’s office didn’t respond to a request for comment but the governor has said that negotiations conducted via video conference, rather than in person, slowed down the process and that writing budget proposals before President Joe Biden’s federal stimulus package was passed created added uncertainty.

“The governor can always plead extenuating circumstances or fiscal uncertainty about federal aid as a reason for delay this year,” Muzzio said. “Yet if the budget’s delay had to do with the legislature pushing its priorities and not taking the governor’s disrespect, then it’s a different analysis.”

As the state assembly began an impeachment inquiry last month into Cuomo and his administration, the governor began holding a series of televised appearances at Covid vaccination sites to highlight what he called a race to crush Covid with the state’s vaccine push. These staged appearances have been closed to the media, citing Covid concerns, but filled with political supporters, Black clergy, local politicians, and health officials who use the occasions to praise the governor and his leadership. During other calls with reporters, the governor has refused to answer questions about the sexual-harassment allegations until an investigation under the state Attorney General Letitia James is completed.

But while Cuomo has tried to project an image that he’s governing as usual, the budget revealed cracks in his armor. The biggest sign of a diminished hand comes in the budget agreement’s tax hikes on the rich, which Cuomo had long derided as a deterrent to business leaders who bring revenue to the state.

“There’s no doubt in my mind that the governor’s problems had an influence on the budget process,” said state Senator Jessica Ramos, a Queens Democrat. “He was distracted at times when the news cycle wasn’t operating in his favor.”

Cuomo practically begged wealthy New Yorkers to come back to the city in August after many of them fled in the pandemic. He joked that he would buy them a drink or cook them dinner if they returned. And after New York was told it would receive more than $12 billion in federal stimulus aid and counted higher-than-expected tax receipts, Cuomo’s budget chief said the state didn’t actually need to raise more money through taxes in order to plug budget holes.

But on Tuesday, Cuomo signed off on a budget package that includes tax increases on the wealthiest New Yorkers and propels New York City to the highest tax rates for millionaires in the nation. “We not only balanced our budget, we are also making historic investments to re-imagine, rebuild and renew New York in the aftermath of the worst health and economic crisis in a century,” Cuomo said in a statement.

The deal also will create two new tax brackets. Those making $5 million or more would be taxed at 10.3%, and those earning over $25 million would be taxed at 10.9%. The new rates would expire in 2027. The agreement projects the new taxes would raise $2.8 billion in fiscal year 2022, and rise to $3.3 billion the next year.

The budget agreement also raises the corporate franchise tax rate to 7.25% from 6.5% for three years.

“The tax increases simply are unnecessary and economically risky,” said Andrew Rein of the Citizens Budget Commission. Using temporary federal funds to support recurring spending sets the stage for future budget cuts or tax increases when the federal aid is exhausted, he said.

“The governor, he did not want to tax the rich or eliminate tax breaks,” said Ron Kim, a Queens Democrat who has feuded with Cuomo over the state’s nursing home deaths.

Kim also highlighted an acknowledgment from the state to fully fund New York schools according to need, the culmination of an 11-year fight by the Campaign for Fiscal Equity to enforce a court order it obtained after first suing the state in 1993.

Another win for lawmakers: $2.1 billion to be spent on benefits for undocumented tax-paying workers who have been excluded from federal unemployment and other pandemic-related benefits -- an issue that held up the budget deal as upstate Democrats worried about its political consequences, Kim said.

There has been a striking difference in negotiations this time around with a far less clear mandate by the governor amid political battles he faces on multiple fronts and a super majority in both chambers in the state’s legislature, said state Senator John Liu.

“In the past, the governor could have things his way because he had the veto card,” said Liu, assistant Democratic whip. “This is the first time he hasn’t had it.”

Still, Cuomo managed to prevail in several negotiations with legislative leaders. Most notably, Cuomo knocked out an attempt by progressive lawmakers to end the preferential tax rate on capital gains, and he won a $1.3 billion appropriation of capital funds for a Penn Station expansion project that city officials have opposed, including New York City Mayor Bill de Blasio, as a land grab by developers without local oversight.

“Many lawmakers feel unease because the Senate and the Assembly expressed vocal opposition to this sweetheart deal to his top donors in the real estate industry and we don’t want to be associated with it by voting for the package,” Kim said Tuesday. “The fact that he can still squeak that in speaks volumes about the power that still resides in the executive office -- even with the scandals.”