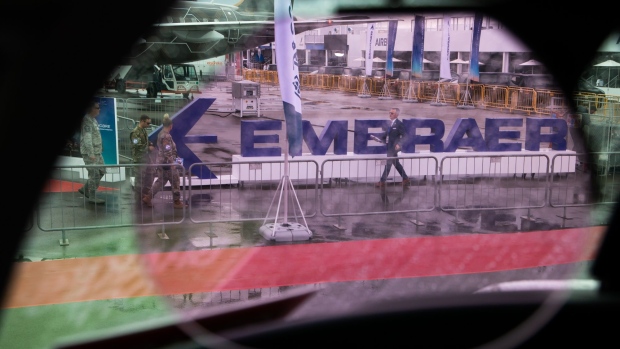 Attendees walking past the Embraer SA signage is seen through the other aircraft during the Singapore Airshow at the Changi Exhibition Centre in Singapore, on Tuesday, Feb. 11, 2020. Plane makers and airlines are exploring new designs to reduce fuel burn and cut carbon emissions in a warming climate. Blending the wings with the fuselage to cut drag is one of several possible solutions. Photographer: SeongJoon Cho/Bloomberg , Bloomberg

(Bloomberg) -- Brazil’s Embraer SA is in talks to merge Eve Urban Air Mobility, its electric vehicle takeoff and landing unit, with Zanite Acquisition Corp., according to people with knowledge of the matter.

The special purpose acquisition company is seeking to raise new equity to support a transaction, said the people, who asked not to be identified because the talks are private. The deal is set to value the combined entity at about $2 billion, they said.

Terms of the deal could change and as with all transactions that aren’t finalized, talks could fall apart. A Zanite representative declined to comment. An Embraer representative didn’t immediately have a comment.

Ricci, the founder of several private-jet companies, bought Flexjet from transportation firm Bombardier Inc. in 2013. The company sells partial ownerships in its fleet of business aircraft, enabling members to fly privately without having to buy planes outright, and competes against NetJets, owned by Berkshire Hathaway Inc.

Eve Urban Air Mobility makes eVTOLs, which have been dubbed flying taxis. Led by CEO Andre Stein, the company this week struck a partnership with Helisul Aviation, a Brazilian helicopter operator, that involves an order of as many as 50 eVTOLs, with deliveries slated to begin in 2026.

Last week, Eve said it struck a partnership with Halo Aviation Ltd., a helicopter travel provider in the U.S. and U.K., which features an order for 200 of Eve’s eVTOL aircraft with delivery commencing in 2026. Halo is part of Ricci’s Directional Aviation.

Other eVTOL companies including Joby Aviation, Lilium GmbH and Archer Aviation Inc. have agreed to go public through SPAC mergers.