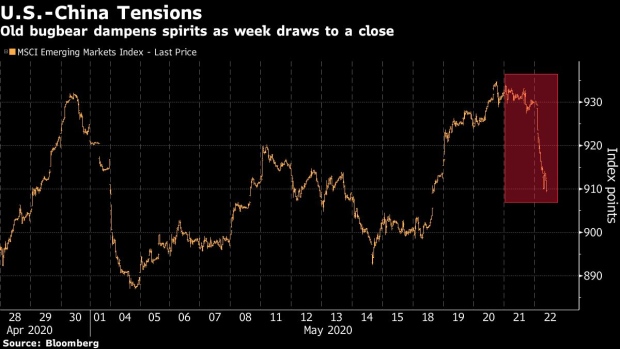 A pedestrian wearing a protective face mask walks past a screen displaying a live broadcast of the National People's Congress in Beijing, China, on Friday, May 22, 2020. China will improve national security in Hong Kong, Premier Li Keqiang said, a day after China announced dramatic plans to rein in dissent by writing a new law into the city’s charter. Photographer: Qilai Shen/Bloomberg , Bloomberg

(Bloomberg) -- Just as early bets on an emerging-market recovery started fueling appetite for stocks and currencies, an old bugbear reappeared to haunt investors: tensions between the U.S. and China.

MSCI’s emerging-markets stock gauge moved deep into the red after a positive start to the week as China announced plans to impose a national security law on Hong Kong, which threatened to further escalate tensions between Washington and Beijing. Signs are mounting that President Donald Trump will make his tough-on-China stance a key element of his re-election bid, while China has warned that it will safeguard its sovereignty, security and interests, and threatened countermeasures.

“The market mood had been rather constructive until recently,” said Sebastien Barbe, the Paris-based head of emerging-market research at strategy at Credit Agricole CIB. “However, more clouds have been accumulating in the EM sky over the past few days, particularly as U.S.-China tensions have been re-emerging. The issue of the degree of independence of Hong Kong vis-à-vis Beijing is now reappearing, and this could fuel these tensions further, in a way the markets may not like.”

China’s National People’s Congress continues next week, after starting proceedings by abandoning the usual practice of setting a target for GDP growth. With this week’s flurry of rate cuts a thing of the past, investors expect a more sedate policy landscape. Hungary, Nigeria and Poland are forecast to leave rates unchanged. Many countries have public holidays next week to mark the end of Ramadan, while Monday is also a holiday in the U.S. and U.K.