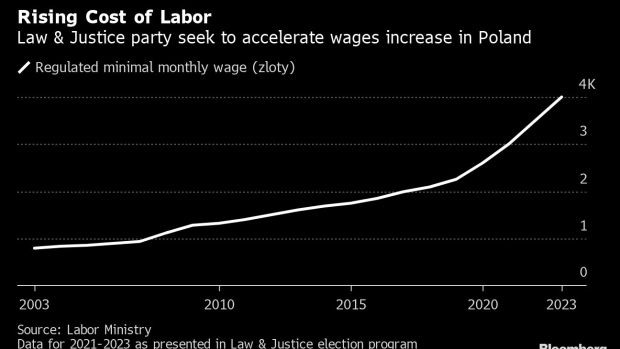 Seeking to further boost its poll-leading standings ahead of next month’s general election, Poland’s ruling party has pledged to raise the minimum wage by 78% to 4,000 zloty per month over four years. Such plans will trigger a sharp rise in costs from 2020 as higher wage levels kick in, and may fuel inflation even earlier, the Lewiatan business lobby group said on Friday.

Lewiatan and 54 of its peers this week wrote an open letter to Prime Minister Mateusz Morawiecki, saying that the plans will dangerously erode growth prospects for the $586 billion economy. According to their calculations, after-tax salaries will drop 11% as a result of the planned social security changes, while company costs will jump 16%. Inflation already stands at a seven-year high of 2.9%.

“The probability of prices rising already in the autumn is rising,” Lewiatan economist Sonia Buchholtz said. Companies will seek to boost prices to avoid bankruptcies, especially in sectors with low margins, she said.

The wage hikes will effectively end the “post-colonial concept of Poland as a source of cheap labor,” ruling party leader Jaroslaw Kaczynski told an election rally in Gdansk on Thursday, drawing applause. “We owe it to Poles to increase living standards. We deserve the same level of life as in the West.”

To help fund its spending pledges, such as higher payouts for pensioners and family benefits, the government plans to remove the cap on social-security contributions for salaries topping 142,900 zloty ($36,600) per year, saddling workers and their employers with additional levies.

This will hurt Poland’s ability to attract investment in sought-after high-end jobs in banking and IT by making it more costly to compete for white-collar workers, according to Lewiatan.

In 2017, the government suspended a similar plan to hike non-payroll costs on higher earners after an industry group whose members including Google, HSBC Bank Plc, and Orange Poland SA said it was a “red light” for investment considerations.

Bloomberg Economics said the wage plans could lead to major job losses and erode the competitiveness of Poland’s economy, undermining its position as a valued part of European supply chains.

Poland’s minimum wage is already high relative to the median wage, suggesting that many will be affected by the policy change -- which is exactly what the ruling party is counting on before the election.

--With assistance from Adrian Krajewski and Konrad Krasuski.

To contact the reporter on this story: Marek Strzelecki in Warsaw at mstrzelecki1@bloomberg.net

To contact the editors responsible for this story: Andrea Dudik at adudik@bloomberg.net, Wojciech Moskwa, Michael Winfrey