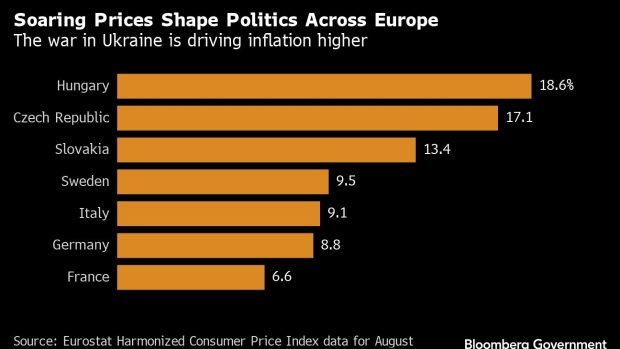 (Bloomberg) -- The crowd of about 5,000 protesters were from the far right and left, and united in their anger. Waving Slovak flags, they demanded an end to the rule of “clowns” and “traitors” they blamed for saddling them with the cost of supporting Ukraine in its fight against Russia.

The gathering on Tuesday evening in Bratislava was the first joint demonstration by Slovakia’s opposition parties in two years, though it wasn’t just an isolated event in a small European nation next door to the war. Across the continent, hardline groups are making political capital from the economic impact of the conflict as food and energy prices soar.

Already there are early, yet alarming echoes of the aftermath of the global financial crisis, a period that ultimately ushered in Donald Trump’s presidency in the US, Britain’s vote to leave the European Union and populist leaderships from Brazil to Poland and Hungary.

Seven months after Russia attacked Ukraine, disquiet over inflation and collapsing living standards has seen the rise of some familiar political forces, whether in direct defiance to the EU’s resolve to wean itself of Russian oil and gas or the old tropes of anti-immigration and nativism.

The far-right Sweden Democrats placed second in this month’s election and will join the government for the first time. In Italy, an election on Sunday is expected to see victory for Giorgia Meloni, who has outflanked rivals on the right by championing “the defense of Italian national identity.” Concern is growing in Germany over a backlash against the economic price of efforts to contain Putin. France, meanwhile, is seeing a slip in support for the current sanctions against Russia.

Discontentment over the fallout from the war is showing up particularly in Europe’s former communist east, where some nations have been more divided over ties to Russia. There were mass protests in the Czech Republic while in Slovakia, opposition parties are calling for the country to emulate Hungarian leader Viktor Orban, Putin’s closest ally in the EU and an outspoken critic of sanctions.

“This era favors enemies of democracy,” said Grigorij Meseznikov, the president of the Institute for Public Affairs, a Bratislava-based think tank. “For some Slovaks, Russia is a shining example of an effective state managed by a firm hand, not some liberal democracy they see as corruption-ridden and ineffective. That resonates here.”

Slovakia, an EU and NATO member, stands out in the region with its low support for the military alliance and its high trust in Russia and its leadership. Only every other citizen believes that Russia actually attacked Ukraine and more Slovaks trust Russians than Americans, a legacy of the country looking to Moscow in the 19th century to protect small Slavic nations, according to research by Institute for Public Affairs.

The Slovak government is actively supporting Ukraine with sanctions, delivery of weapons and helping about 88,000 refugees who have requested to stay in the country. In response, opposition leader Robert Fico and his cohorts are using an Orban-style anti-EU narrative to bolster their popularity.

Fico’s Smer party rebounded from record low support of 9.1% in January of 2021 after a corruption scandal to 14% now, propelled by the pro-Russian and populist rhetoric. That places it second in Slovakia’s fragmented political landscape, pitching the three-time former prime minister for another tilt at power against the minority administration.

“The government and president are to a large degree responsible for price increases because they dragged Slovakia into a war that Slovakia has nothing to do with,” Fico told supporters on Tuesday in Bratislava, the Slovak capital. “Early elections are the way to get out of this crisis.”

The danger is that given the EU’s veto rules, Slovakia would join Hungary as a potential disruptor to the bloc’s resolve to counter Putin with energy sanctions, said Meseznikov. Fico could become a softer version of Orban, he said, acting as a “deal breaker.”

Next door in the Czech Republic, the far-right Freedom and Direct Democracy party for the first time came second in a poll this month, ahead of any ruling party. That was down to its “protest nature” given the uncertainty among citizens, Prague-based pollster STEM said.

Tomio Okamura, the son of a Czech mother and a Japanese-Korean father, has become the face of Czech nationalism as the party leader. In parliament this month, he blasted the government as a group of “warmongers” that acts on behalf of Ukraine.

Members of his party spoke at a protest in Prague earlier this month that drew about 70,000 protesters calling for more state help, some blaming the government for preferential treatment of Ukrainians over their own.

“I’ve been saying from the start that imposing economic sanctions against Russia was a totally stupid thing to do,” Okamura said on the party’s website. Europe, once it starts to freeze in winter, will end up “crawling to Russia on our knees” for help, he said.

Europe’s energy crisis is costing the 27 EU member states and the UK almost 500 billion euros ($496 billion) as governments try to mitigate the hit from soaring prices, the Bruegel think-tank estimated this week.

As opposition leaders noted in Bratislava on Tuesday, their view that the cost is untenable is also shared by protesters in Western Europe. An EU diplomat said both France and Germany are conscious that a tough and prolonged winter marred by power cuts and high bills may make it hard to contain the discontent.

In Germany, it’s mainly in the former communist east where many still feel a stronger sympathy for Russia than for the US. The German government is worried that the mixture of soaring energy prices, a looming recession and accelerating inflation might lead to social unrest over the winter. The country is nationalizing its largest gas importer to avert the energy industry’s collapse.

According to a Forsa poll, 42% of East Germans support the sanctions against Russia compared with 66% in the western part of the country. Chancellor Olaf Scholz recently accused the opposition of exploiting the energy crisis during a rare outburst in parliament.

Just as in Slovakia, the extremes of politics united in a protest in Germany last week. The radical left Die Linke organized a demonstration in the East German city of Leipzig against the government’s energy and social welfare policies. Banners held by their supporters showed similar demands — lower the energy prices and make peace with Putin.

In France, unconditional support for sanctions against Russia now stands at 40% compared with 46% in March, according to an Elabe poll for BFMTV. That’s as euro region inflation approaches double digits.

Far-right leader Marine Le Pen, runner up in April’s presidential election, blasted the government for the 15% increase in the price of electricity and gas and predicted taxes would have to rise to pay for mechanisms to shield businesses and consumers from bigger price increases.

At the protest in Bratislava, it was clear where the anger was targeted. Backing Putin’s statement that he invaded Ukraine to fight the “fascist” leadership in Kyiv, 55-year-old Julia Lackovicova held a home-made banner declaring support for his narrative.

The EU, NATO and US are “murderers of nations in economic and also physical way,” she said. “Putin warned the world long ago. Fascism in all of the EU is rising and everyone is closing their eyes to it.”