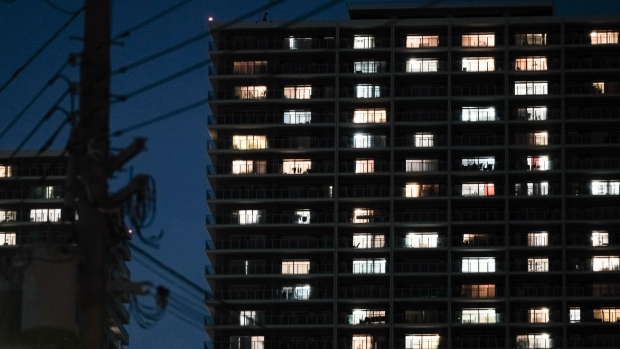 (Bloomberg) -- The slump in the Japanese yen, the war in Ukraine and a heatwave in Tokyo are pushing the world’s third-biggest economy toward a full-blown energy crisis.

Japan imports about 90% of its energy, mostly priced in dollars, and costs were already soaring from a jump in global oil, gas and coal prices, even before the yen fell to its lowest level in two decades.

The price of Brent oil, a benchmark for global trade, has risen more than 40% in dollar terms this year, bolstered by Russia’s invasion of Ukraine and a recovery in demand. But in yen terms, it’s up almost 70%. The average cost to import a ton of liquefied natural gas in the Japanese currency was almost 120% higher in May than a year earlier, according to the latest trade data.

“A confluence of factors, including the higher fuel prices since the war and the tumbling currency, is putting a significant pressure on Japan's energy security, making this one of the most serious energy crises Japan has had,” said Jane Nakano, a senior fellow at the Center for Strategic & International Studies.

Prime Minister Fumio Kishida’s government joined the Group of Seven countries in imposing sanctions on Russia and shunning its oil and coal, tightening the pool of available supplies for Japan. His administration was jolted on Friday by Russia's move to transfer rights to a key natural gas project in Sakhalin that could force foreign stakeholders out, including Japan.

On top of that, most of the nation’s nuclear reactors are still offline since the Fukushima disaster more than a decade ago. Renewable energy accounted for less than 10% of Japan's primary energy supply in the year ended March 2019, according to data from the IEA, leaving the country with little option but to pay the high fossil-fuel bill to keep the economy going.

Why the Yen Is So Weak and What That Means for Japan: QuickTake

Supplies are being strained even more by an unseasonably hot summer, with temperature in the capital nearing 37 degrees Celsius (99 Fahrenheit) last week, compared with a 30-year average of 22.5 Celsius. The rainy season in the greater Tokyo area ended the earliest on records going back to 1951 and the government is asking citizens nationwide to conserve power.

The cumulative effect of all these factors is putting Kishida’s administration in a tough position, especially with an upper-house election due on July 10. Fuel rates aren’t the only imports affected by the yen’s dive and increased global competition for supplies. Prices of food and raw materials to make everything from paper to steel and concrete are also soaring.

The situation has revived a long-running debate over Japan’s energy and food security, Masakazu Tokura, the head of Japan’s biggest business lobby Keidanren, said in April. Costly fuel and the weak yen pushed trade imports to a record in May, up nearly 50% from a year before, keeping the country’s trade balance in the red. While the weak currency may give a tailwind for Japan’s exporters, many of its manufacturers that depend on overseas commodities have been forced to transfer rising costs to consumers.

“Our industry is getting double slammed,” said Tamio Akiyama, managing director of the Japan Paper Association, an industry group. “We’ve not seen fuel prices surge this high so quickly before, and the outlook on the yen is hard to predict.”

Rising costs of coal and wood chips prompted producers including Nippon Paper Industries Co. and Oji Holdings Corp. to raise the price of printing paper and business communication paper by at least 15%. The nation’s two biggest steelmakers are negotiating price increases with customers.

The nation has had some respite with the price of Brent crude easing about 2.8% in the past two weeks. But the country looks to be in for a hot and expensive summer.

The latest crisis has spurred debate over Japan's energy policies and power-market structure. On one side, it may add momentum to expand renewable energy. Japan’s first two large-scale offshore wind farms, under construction by Marubeni Corp., are scheduled to come online this year, and a change to bidding rules could speed up new projects. While that could help decarbonize the energy mix, it threatens to add more instability to a grid that's already stretched.

The crisis has also revived debate over the use of nuclear power, long considered a touchy subject since the 2011 Fukushima nuclear disaster. The government may seek ways to restart idled atomic plants, according to Noriaki Oba, President of Post-oil Strategy Institute in Tokyo.

“There could be a big impact to the country's policies following the upper house elections,” Oba said. “Public calls for restarting reactors are getting stronger.”