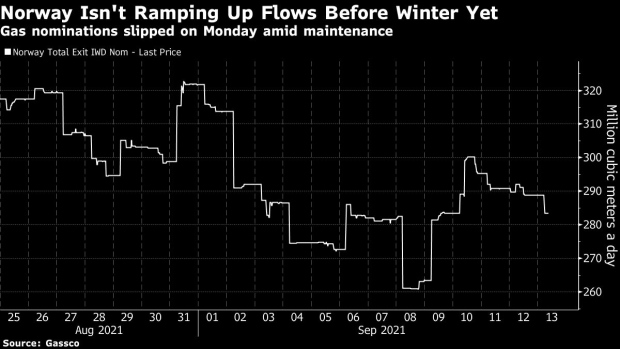 (Bloomberg) -- Europe’s energy crunch is deepening, with gas and power prices hitting fresh records after the U.S. warned the continent isn’t doing enough to prepare for what could be potentially a dire winter.

With about a month to go before the start of the heating season, Europe doesn’t have enough natural gas in storage sites and isn’t building inventories fast enough either. Amos Hochstein, the  U.S. State Department’s envoy for energy security, said on Friday he was worried about supplies this winter.

Energy demand is rebounding across the world as economies reopen and people return to the office. Gas stockpiles in Europe are already at the lowest level in more than a decade for this time of year, pushing up the cost of producing electricity. The rally in European energy prices is just a taste of what’s to come for other commodities, Goldman Sachs Group Inc. said in a report.

“European energy pricing dynamics offer a glimpse of what is in store for other commodity markets, with widening deficits and depleting inventories leading to elevated price volatility,” said Goldman analysts including Jeff Currie. For European gas, “demand destruction is the only option to rebalance markets,” they said.

Europe is struggling to boost supplies, with flows from No. 2 supplier Norway currently limited due to maintenance. Top seller Russia is “is coming off an extended period of inexplicably low supply” at a time when U.S. deliveries of liquefied natural gas can’t be increased further, Hochstein said.

“I worry because I don’t think we should ever be in a position knowing that if it’s a cold winter, there’s not enough supply,” he told reporters during a visit to Warsaw.

Benchmark European gas futures traded in the Netherlands exceeded 60 euros a megawatt-hour, climbing as much as 4.6% to a new record. The U.K. contract for next-month surged as much as 4.3% to 151.79 pence a therm.

Soaring gas prices are fueling a rally in electricity. German power futures for next year, a benchmark for Europe, surged to a record 99.25 euros a megawatt-hour, while the equivalent French contract reached an all-time high of 102.75 euros a megawatt-hour on the European Energy Exchange.

Short-term prices are also gaining, with low wind power across most of Europe boosting costs. A bigger requirement from more expensive fossil-fueled plants to meet demand has lifted the German day-ahead contract to the highest since 2007 and the U.K. equivalent above 200 pounds for the fourth time in two weeks.

“If supply were to disappoint further and winter weather turns out colder than normal, European gas and power prices may have to rise further to ration demand and thus curb energy-intensive industrial production,” Goldman said.