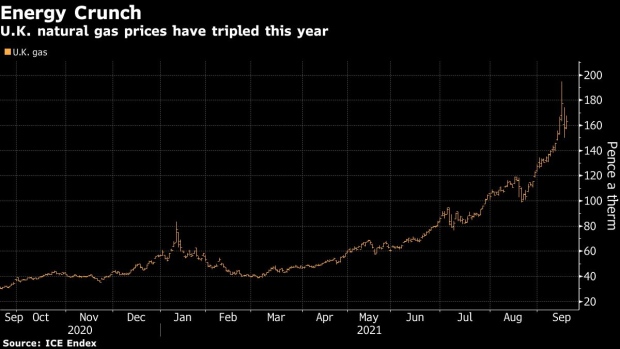 An electricity pylon near the Sellindge Convertor Station, operated by National Grid Plc, following a fire at the IFA interconnector site, in Sellindge, U.K., on Thursday, Sept. 16, 2021. Winter blackouts are now a real possibility after the fire took out a key cable that ships electricity to the U.K. from France. Photographer: Chris Ratcliffe/Bloomberg , Bloomberg

(Bloomberg) -- U.K. energy companies are seeking a massive government bailout as a surge in gas and electricity prices threatens to push small unhedged suppliers out of business.

After emergency talks all weekend, Business Secretary Kwasi Kwarteng meets industry bosses early afternoon local time on Monday. Time is pressing, as the CEO of one energy supplier warned it may not survive the winter without government help.

The U.K.’s usual mechanism for dealing with failed suppliers -- whereby customers are transferred to a surviving company -- may not work this time as surging market prices make it unprofitable for a company to take on more clients.

As for customers, they are protected for now by a price cap -- which is adding to the pressure on companies -- but that will be revised next year in a new risk to the inflation outlook.

Green, a small energy supplier, says it may not survive the winter without government help.

“I feel without any support methods being put in place from the government is unlikely that we will see the winter through,” Chief Executive Officer Peter McGirr told the BBC.

The company serves more than 250,000 households.

RBC estimates that bills could jump as much as 400 pounds ($547) a year because of surging prices.

“Electricity suppliers are now facing critical pressure against rising commodity prices,” RBC said in a note. “We see heightened risk for smaller, less well hedged energy suppliers to face bankruptcy in the event of this crisis, but we are mixed on if this presents a positive longer term opportunity for larger energy suppliers in the U.K. such as Centrica.”

Centrica shares fell as much as 1.9%.