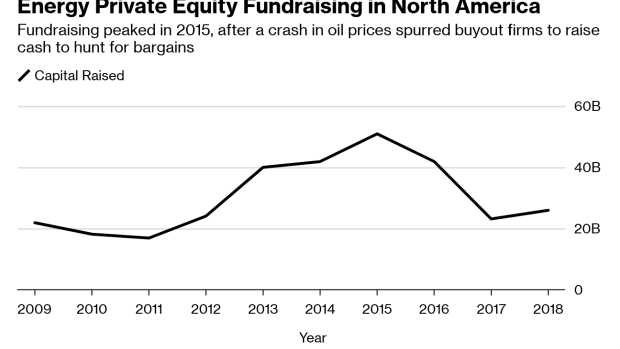 The silhouette of an electric oil pump jack is seen at dusk in the oil fields surrounding Midland, Texas, U.S., on Tuesday, Nov. 7, 2017. Nationwide gross oil refinery inputs will rise above 17 million barrels a day before the year ends, according to Energy Aspects, even amid a busy maintenance season and interruptions at plants in the U.S. Gulf of Mexico that were clobbered by Hurricane Harvey in the third quarter. Photographer: Luke Sharrett/Bloomberg , Bloomberg

(Bloomberg) -- Commodity prices are rallying and U.S. crude production is booming. But when it comes to new powder for the oil patch, private equity’s well may be running dry.

Energy-focused firms in North America closed just four funds with $1.4 billion in capital in the first three months of 2019, according to data provider Preqin Ltd. That was the sector’s smallest total in three years and a sharp drop from $4.8 billion for a dozen funds during the same period in 2018.

The quarter marked a five-year low for energy fund closings and the weakest for the amount of capital raised since the beginning of 2016. The volatile fundraising cycle launched by the 2014 oil price crash and the promise of buying energy assets on the cheap may have reached its nadir.

Energy buyout firms are struggling to raise cash even as the oil and gas industry is captivated by the sector’s biggest takeover battle in years. Anadarko Petroleum Corp. on Monday said it favored a $38 billion offer from Occidental Petroleum Corp., scuttling its $33 billion agreement to sell to Chevron Corp.

Private equity in North America raised $132 billion for energy investments from 2014 to 2016, led by firms including Warburg Pincus, First Reserve Corp. and Riverstone Holdings, according to Preqin.

That blitz has now fallen back to pre-crash levels. The dip reflects a broader trend in private equity: Limited partners, or fund investors, are getting choosier.

Global fundraising across the industry was flat in the first quarter -- at about $100 billion -- while the number of funds that closed fell by more than a third to 219. That’s the fewest number of funds to close in a single quarter in five years.

So the pie isn’t shrinking. There are just fewer slices. And a bigger share is going to top players raising jumbo funds, such as Blackstone Group LP.

"The first quarter had remarkable money gathering," Blackstone Chief Executive Officer Stephen Schwarzman said in an interview last month. "We’ve raised $126 billion in the last 12 months, which is like an out-of-body experience."

One reason for the anemic energy fundraising is that after a boom, contraction follows. Buyout firms are still deploying money raised after the oil-price rout, with $189 billion in so-called dry powder in energy funds globally as of March 2019, according to Preqin.

"Following the 2014 oil crash there was a rebound in interest by certain investors who believed that stress in the sector would lead to attractive opportunities," said Kelly DePonte, managing director at Probitas Partners, an advisory firm that helps private equity groups raise capital. "This opportunity did not pan out as expected, either as many energy companies under stress held on until a modest rebound in oil prices gave them the opportunity to continue, if not flourish."

The changing market dynamics have required managers to adjust. They’re targeting smaller funds and taking longer to raise them.

Warburg Pincus is seeking $2.5 billion for its second energy fund, according to people familiar with the matter, after raising $4 billion in 2014 for its predecessor. For the latest fund, the firm has yet to hold a first close, or the point at which it can begin spending the capital, said the people, who asked to not be identified because the matter isn’t public.

Other firms that solely focus on energy are finding the environment difficult.

First Reserve started raising its 14th fund in 2018 with a target of $3 billion, according to a person familiar with the matter. It’s raised just $700 million so far, the person said.

Performance could be a factor, too. The prior energy funds for Warburg Pincus and First Reserve have delivered a rate of return below the 20 percent that private equity investors are typically promised, according to people familiar with the matter.

First Reserve’s 2013 and 2008 funds are producing returns of 15.7 percent and negative 9 percent, respectively, according to data compiled by Bloomberg.

Representatives for Warburg Pincus and First Reserve declined to comment.

The environment has prompted at least one firm with plenty of unused capital to slow a return to market until needed.

Riverstone held talks with backers about raising a new $6 billion fund last year but has yet to formally begin fundraising, people familiar with the matter said. Riverstone’s 2015 and 2012 funds are returning 21.7 percent and 5.5 percent respectively, according to data compiled by Bloomberg.

While performance is a factor in investor thinking, other, more structural trends may be at play, according to Thomas Liaudet, a partner at Campbell Lutyens, a private equity advisory firm.

Energy funds raised from 2011 to 2014 have on average returned just half the money they have raised to investors, he said.

"The pressure to distribute to their investors has been growing," he said.

Institutional investors have also begun shying away from their exposure to fossil fuels due to environmental, social and governance concerns, he said, adding that they’re starting focus more on renewable energy investments.

(Updates with details of Anadarko deal in fourth paragraph.)

To contact the reporter on this story: Kiel Porter in Chicago at kporter17@bloomberg.net

To contact the editors responsible for this story: Elizabeth Fournier at efournier5@bloomberg.net, Matthew Monks, Michael Hytha