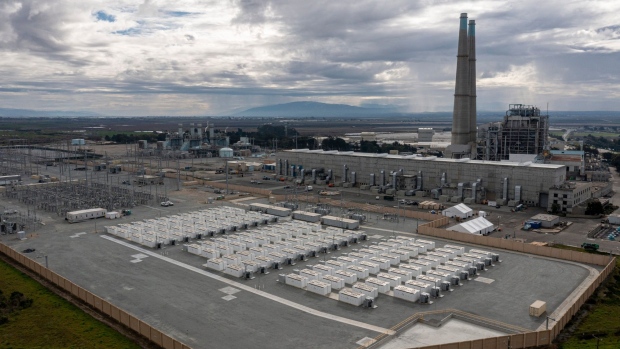 Tesla Megapack batteries at the Elkhorn Battery Energy Storage System next to the Vistra Moss Landing natural gas fired power plant in Moss Landing, California, U.S., on Monday, Jan. 17, 2022. PG&E and Tesla Inc. have built the 182.5-megawatt battery energy storage project at the utility’s Moss Landing substation near Monterey Bay. When it comes online later this year, it will be among the largest such utility-owned systems on Earth. Photographer: David Paul Morris/Bloomberg , Bloomberg

(Bloomberg) -- Energy Transfer LP said it agreed to supply natural gas to power plants in Texas owned by Vistra Corp. through the end of March as the two sides work through a billing dispute from last February’s winter storm.

The two companies came to an agreement after Vistra filed a complaint earlier this week with oil and gas regulators, asking them to intervene because Energy Transfer had allegedly threatened to cut off gas supplies by Jan. 25.

The dispute comes as freezing temperatures have descended on Texas, resulting in a dip in natural gas production.